Book Review: ‘The Art of Racing in the Rain’ 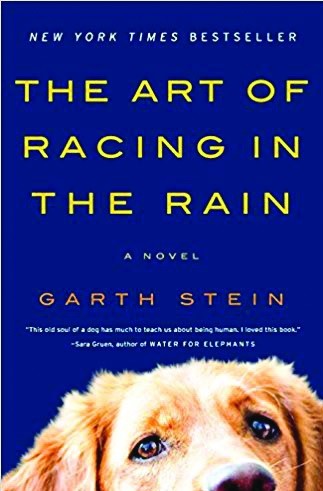 “The Art of Racing in the Rain” by Garth Stein tells the story of one dog’s life told from his own perspective. Enzo, a loveable golden retriever, begins his story at the end, when he knows his sun is setting sooner than later.

The novel may have a sad undertone throughout because it begins of the eve of Enzo’s last day living, but this has a bigger meaning — the dog tells his story starting from when he was a puppy and met his humans. Enzo then goes through his years with Denny, his owner, and how their family of two grew into a family of four.

“Enzo knows he is different from other dogs: a philosopher with a nearly human soul (and an obsession with opposable thumbs), he has educated himself by watching television extensively, and by listening very closely to the words of his master, Denny Swift, an up-and-coming race car driver,” Garth Stein’s official website reads. “Through Denny, Enzo has gained tremendous insight into the human condition, and he sees that life, like racing, isn’t simply about going fast. Using the techniques needed on the race track, one can successfully navigate all of life’s ordeals.”

My mother nagged me to read “The Art of Racing in the Rain” because she knows I am a huge dog person and even more so with goldens. Here’s the thing, though: I refuse to watch or read anything where a dog dies or gets hurt physically or emotionally, so when my mom told me about this book, my answer was an automatic “NO!” After some serious convincing on my mom’s part, I reluctantly began reading.

“The Art of Racing in the Rain” will make you laugh, cry, and look at your pets in a whole new way. If you aren’t already wondering what your dog thinks of you, you will be after reading this. This is the only thing involving a dog who dies that I would consider going through the emotional rollercoaster for. Dog enthusiast or not, Stein’s novel is something everyone should experience at least once.