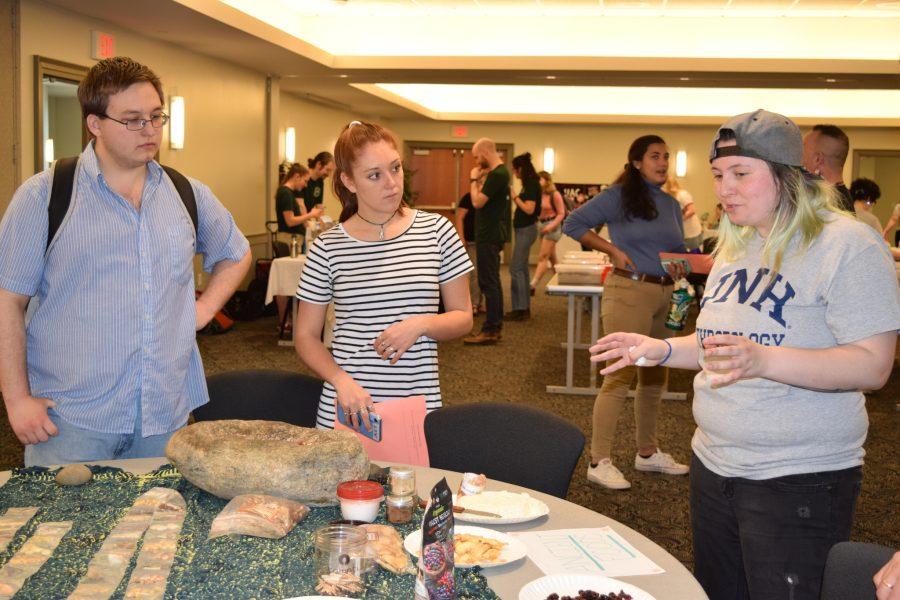 The University of New Hampshire (UNH) Anthropology Club hosted its annual Open Archaeology and Anthropology Day in the Piscataqua Room inside of Holloway Commons on Friday, April 19, offering guests a variety of activities including a behind-the-scenes look at the college’s current and past archeology endeavors.

“This is an event that I and my colleague, the chair of [the Department of] Anthropology, Meghan Howey, have been running. We have done this every year in the month of April because April is New Hampshire Archaeology Month,” Marieka Brouwer-Burg, Ph.D., a senior lecturer in the Department of Anthropology, told The New Hampshire. “We wanted to have a day where we could open up our lab; we used to do this in our lab which is in the basement of Huddleston Hall for students and for people from the general public to do hands-on archaeology.”

The event soon expanded to include more aspects of anthropology.

Brouwer-Burg said that there were colleagues from Indigenous New Hampshire in attendance, and there were representatives from Hillel and the United Asian Coalition as well.

“We do want to make it truly open so anybody from the community can come. The New Hampshire Archaeology Society always post it on their Facebook page, and they have a broad reach to people all over the state,” she said.

Howey stressed that the event marked a good opportunity for incoming students from around New Hampshire to get a feel for the department.

Amy Michael, Ph.D., a biological anthropologist and a lecturer in the Department of Anthropology, explained some differences within the vast discipline of anthropology.

“As anthropologists we have a varied field; some of us are cultural anthropologists, archaeologists, forensic anthropologists, medical anthropologists. This is an event to showcase the various fields and get students some hands-on application. Move this out of the class room and into a practical experience,” she said. “You can flint knapp, you can throw a spear, you can measure some skulls, so on and so forth.”

She had human teeth and a recreation of a Neandertal skull at her station.

“My table is showing what we can use in bioarcheology and forensic anthropology to use the human skeleton to get more information about either the past and how people lived or the present and help solve forensic cases using skeletal remains,” she said.

Amy said she was pleased by the turnout and interest of students at the event.

“It’s very cool to see students from all walks of UNH life coming and learning about anthropology,” she said.

Brouwer-Burg shared a similar sentiment, saying that “I think we might have a bigger turnout this year than we’ve ever had. Just given what I’m seeing now.”

“That’s a collaborative group of students, professors, community members and indigenous peoples working to reframe New Hampshire’s history from an indigenous perspective,” she explained. One of her projects included 3D-printed models of the White Mountains.

“They have the indigenous stories of the spiritual connections with those places. Also, just the utilitarian use of the lithic materials,” she said.

Another interesting table included a showcase of meals people would have eaten thousands of years ago.

“Our ancient foods station is where we have a bunch of raw foods on display that Paleo and Neolithic peoples would be hunting or gathering. It’s before people are planting or using agriculture,” senior anthropology major Caroline Aubry said as she described the types of food available. “We have a few different types of jerky; venison, beef, turkey and salmon. We have some different fruits that people would forage as well as some home-made cheese from one of our professors, Marieka,” she added.

Participants could even make their own food as well, with Aubry explaining that the station featured a “stone mill that has hazelnuts in it that you can use to make raw hazelnut butter. It’s actually really easy and people would use these stone mills around the world. Here in North America, they’d be using acorns, but as you grind the nuts the oils come out and it binds it into a paste, so all you need is a rock and a handful of nuts and within an hour you can have fresh hazelnut butter or acorn butter or peanut butter.”

Next to that station was a mock dig where participants could simulate working at an archaeological site.

“Each box is a representation of a plot that we would have in the field. It’s meant to give an idea of the methodical work that archeological digs require,” anthropology major Hannah Corrow, who was running the activity, said.

Several events at Archaeology Day took participants through the history of UNH itself.

The Open Archaeology and Anthropology Day featured a turnout of nearly 100 people.