Smash burgers give me life 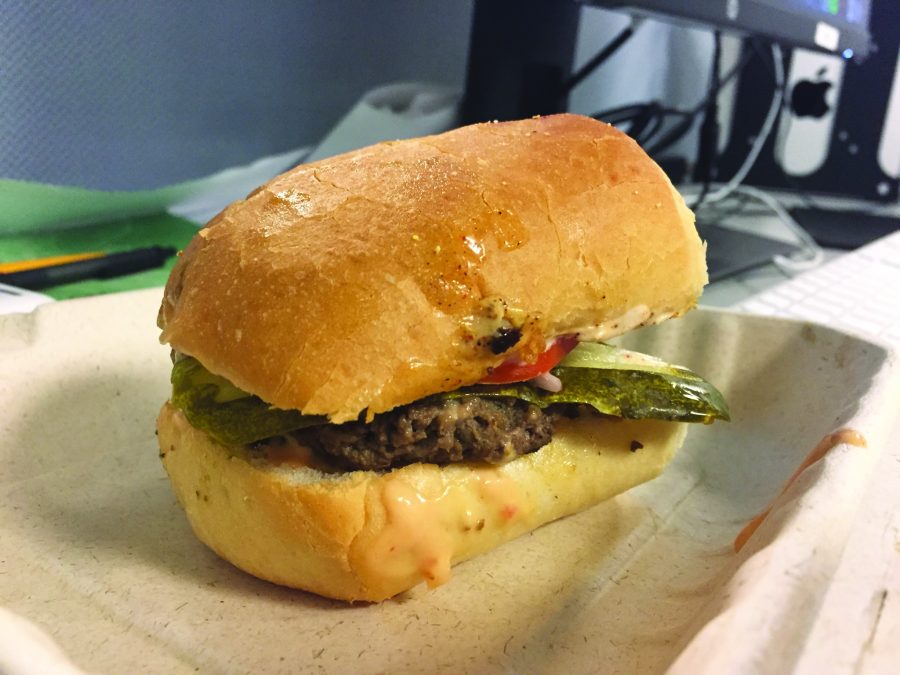 We walked through the bustling walkways of Holloway Commons as hungry as three student newspaper editors have ever been (probably). It was 6 p.m., so that meant wafting scents of steaming pasta, greasy Philly cheesesteak subs and curious-looking dining hall fish that I wouldn’t touch with a 10-foot pole. Disappointment washed over my face as I surveyed the evening’s harvest – that is, before The New Hampshire Sports Editor Sam Eggert said something that would forever change my life:

“I think they have smash burgers tonight – that’s definitely the move.”

“Smash burgers?” I asked him. He shook his head in utter disgust at my ignorance.

“Come on, I’ll show you,” he said. He led me through the commotion of the dining hall, a seasoned veteran about to teach a newly-minted trainee the dark arts of the University of New Hampshire’s (UNH) hidden dining hall gems.

Holloway Commons, UNH’s central dining hall, can have some dinner options that leave many wondering – myself included – why we even wasted the time perusing the unfortunate available meals. For some, like Eggert, this means learning to scour the place for every diamond in the rough available. One of these delicious surprises, the so-called “smash burger,” which is just a small hamburger served with a medley of toppings grilled right in front of you, is served infrequently at the usual stir fry line and normally draws a long line of eager students.

I apprehensively stepped into line to order my first-ever two smash burgers. Excitement coursed through my veins as Sam guided each of my selections, from pepper jack cheese for a little spice of life to thousand island dressing for an indigenous touch. My stomach growled as they tossed my two sizzling sliders onto the grill, the taste already almost palpable as the grilling patties’ crisp and warm smell entered my nasal cavity.

I about sprinted to my seat to dig into the steaming burgers. As I demolished almost half of the slider with my first bite, my taste buds danced a capering jig of satisfaction and pure euphoria. The cheese, the fresh hamburger patty, the added sauce, the ragbag of other amazing ingredients; they all came together to form the perfect union of dining hall matrimony.

Thus, I consumed the best meal I’ve ever eaten at Holloway Commons.

HoCo has its moments, it does – and sometimes, it really doesn’t – but none have ever topped the smash burger, and I doubt any ever will. Every Wednesday night when we take a break from production nights (which consist of laboring in our little windowless newspaper cave) and venture out into the public to get some nutrition, I hope and pray that the HoCo Gods have blessed us with the one dining hall delicacy that hits a little different.

If not, at least there’s the London broil, and I get the chance to test my meat-eating chops against the best of the best in my quest to take the belt from the reigning dining-hall-meat-eating champion, Ian Lenahan. Until then, I’ll be fueling up on smash burgers.