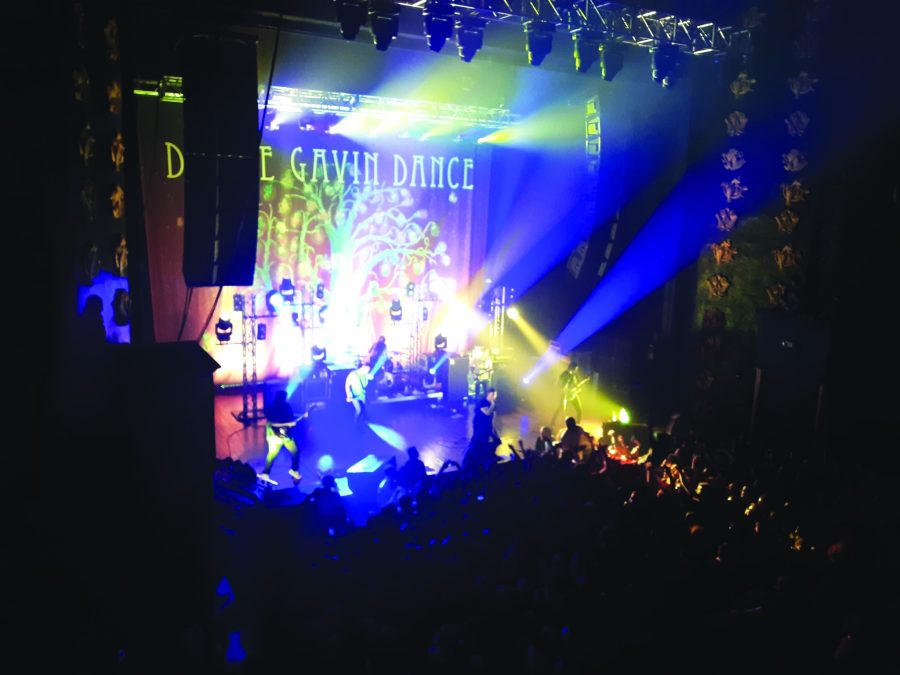 It was 10 p.m. on Sunday, and the lights in the Worcester Palladium were dim. Some rap music I didn’t recognize was playing over the speakers and the sold-out crowd watched the guitar and drum techs as they prepared the stage for Dance Gavin Dance (DGD), a post-hardcore band from Sacramento, California, who were headlining the Artificial Selection Tour. My hands gripped the two items of DGD merch I bought between opening acts. The rest of the crowd was getting antsy too.

Before long, though, the overhead lights flicked off, the stage lights came on and the members of the band I’ve been listening to religiously for several months began to take their places on the small stage. My heart swelled, and the mental countdown to this moment that I’d had going for two months ended.

The Worcester Palladium opened in 1928 as the Plymouth Theater, according to The Pulse Magazine – a lifestyle and entertainment magazine that covers central Massachusetts – and was built by American architect Arland Johnson. The Plymouth Theater seated 2,200 people (the capacity is similar today) and hosted films and vaudeville acts. After a series of renovations and changes to the types of events held there over the years, the now-renamed Palladium is best known as a venue for hard rock and metal shows, but the Palladium’s website states that it has also hosted acts as varied as Bob Dylan, Skrillex, Kanye West, and even The Three Stooges, in the past.

There are two spaces within the Palladium where shows can be held—the larger room downstairs, and a smaller space upstairs. Additionally, some small music festivals are held outside the venue, aptly named “The Palladium Outdoors.” I was struck as I settled into a first-row balcony seat by the juxtaposition of the intricately sculpted cherubs above the stage and the music the venue hosts.

The first supporting band, Covet, a trio of friends, seemed to fit best in the Palladium – the echoing of the lyric-less set was mesmerizing and reminiscent of the earlier days of the Palladium’s history. Meanwhile, Hail the Sun, the second supporting band, surprised those who were unfamiliar to the band by having vocalist Donovan Melero hop on the drum set and energetically sing and drum simultaneously. Before he settled at the drum set, he could be seen notably hitting the cymbals with the palm of his hand.

Don Broco, a British rock band who followed Hail the Sun, got the crowd moving with “Everybody,” “Pretty,” and other songs that have increased the band’s popularity in the United States over the past few years. Anyone who had been dragged to the Artificial Selection Tour would be entertained by vocalist Rob Damiani and his aerobics instructor-like dance moves. The last of the supporting bands, Periphery, a prog-metal group, probably was more enjoyable to watch for those on the floor than those on the balcony. The group’s sound is extremely conducive to moshing – or at the very least, jumping around a little – but not so much for sitting.

I was impressed by the performance during DGD’s first song, “Son of Robot,” the opening track from DGD’s newest studio album, “Artificial Selection,” but it wasn’t until “Count Bassy,” about halfway through the set, that I realized the sound quality on “Son of Robot” was not a fluke. Maybe it had to do with the acoustics of the theater, or maybe DGD is truly that talented, but my jaw dropped as the set continued and the clarity and tone remained constant.

DGD’s set primarily featured songs from their two most recent albums. While the setlist was varied and satisfying musically for the audience, they only played one song, “Uneasy Hearts Weigh the Most,” from the eras prior to the arrival of current clean vocalist Tilian Pearson. The lack of representation of DGD hits from 2005 to 2012 may be due to Pearson’s vocal range differing from former vocalists Jonny Craig and Kurt Travis, or maybe the band just wants to “rebrand” in a way, but it was a little disappointing to not hear classics like “Lemon Meringue Tie” or “Tree Village.” Nonetheless, ending the show with “Evaporate,” the final track on “Artificial Selection,” was memorable, powerful and gave the audience a taste of DGD’s sonic evolution – the last minute of the song is an elegantly-composed mashup of several songs from every album DGD has released, and it was heartwarming to hear tiny blasts from the past.

It was drizzling when the show ended around 11 p.m. The mass of happy concert-goers emitted a low roar of excited conversations as we all crossed the street to the parking lot, and as I watched all the people with whom I shared five musical hours, my thoughts went directly to the words of DGD unclean vocalist Jon Mess in the band’s newest single “Head Hunter”: