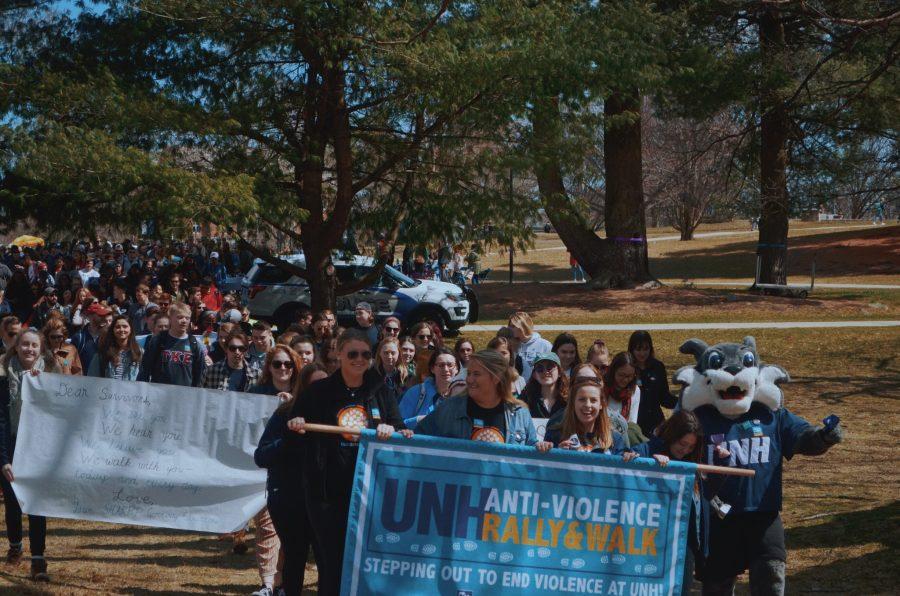 Described by WildcatLink as a “social movement,” a 20-minute march across campus featuring nearly 300 participants from a variety of studies, grades, organizations and experiences highlighted the hour-and-a-half-long rally. The trek took participants across much of campus, starting off on the Great Lawn in front of Thompson Hall and onto College Road before making their way onto Academic Way.

From there, the long line of students, community activists, and Wild E. Cat himself – armed with cowbells and custom-made signs and banners reading phrases such as “Step out Against Violence,” “TKE [Tau Kappa Epsilon] Walks With You,” and “No More Silence, End the Violence” – turned onto Mill Road, where they were greeted with supportive bus and car horns echoing the cowbells and chants like “2,4,6,8; no more violence, no more hate” and “we believe survivors.” The congregation finally moved back to Main Street before returning to the Great Lawn to turn in their cowbells.

Students from across various studies and colleges, like first-year biology and education major Chloe Smith, stated their support for those negatively affected by domestic violence and survivors of sexual assault, as well as for more conversation on the issue of sexual misconduct, as their motivations for participating.

“[It isn’t] talked about enough on campus,” Smith, joined by her Ultimate Frisbee teammates, told The New Hampshire during the march, adding that “events like this are a good way to get that going.”

“…I really support the message and I think it’s important that other people know how common it is for people to be sexually assaulted,” junior psychology major Celine Rousseau said amidst clanging cowbells and student cheers.

“They are such an important organization to our campus,” senior communications and political science major Kyle Sharp, who said this was his third time participating in the Anti-Violence Rally, said about SHARPP during the march. “They provide support to people who need it, and they are advocates, and are just vital to the UNH community and they’ve done so much incredible work and they’re going to continue to do it.” Sharp also called events like Thursday’s rally “empowering” and “passionate.”

On top of the march, the rally served as a platform for several headlining guest speakers beforehand, especially for employees and students from and representing SHARPP.

“…the goal [of the rally] is to bring awareness to the fact that we here want to reduce violence here in our campus of all forms, whether that’s sexual violence; whether that’s relationship abuse; whether that is homophobia, transphobia, racism; we’re trying to reduce that violence to the best of our ability,” SHARPP Outreach & Training Coordinator Erica Vazza, who organizes events like the Anti-Violence Rally, told The New Hampshire prior to the guest speakers.

SHARPP Director Amy Culp kicked off both the speeches and the event itself. During her speech, Culp shared her personal experiences and how they influenced her views on sexual misconduct, adding that she aimed to “represent the many different faces and voices of our office.”

The SHARPP director said that this year’s speech was more “tough” than in previous years, suggesting that world events, as well as events surrounding sexual misconduct and violence, are becoming “weightier” and “edgier.” Culp said the difficulties also started days before as she was trying to decide whether to wear the shirt she ultimately wore to the event, which read, “embrace your voice.” As she settled on the shirt, she recalled asking herself what the shirt truly meant to her and why she chose to wear that shirt this year, partially inspired by events from her childhood, stories she said she wasn’t sure whether to tell at the rally.

“Do I share the family history that often gets shared about me that I was the loudest baby in the nursery, and the family joke is that I came out screaming and have never shut up,” Culp said. “…Do I tell the story where I was five years old and I was challenged by my male cousin for a sexist comment and I was quickly called a ‘Communist pinko?’…Or do I share the story about how my biggest childhood dream was to be the first female NFL coach, but I was told that it would be difficult for me because they, in quotes, ‘wouldn’t accept me?’ Or do I share the story where I was told here at UNH to be careful and watch what I say because I don’t want them, in quotes, ‘to see me as,’ in quotes, ‘one of those women?’

“For my life, as I imagine for many of yours, I have been taught to be afraid of, quote-end-quote, ‘them,’ and to watch out for ‘them’ because I ultimately was not ‘one of them,’” Culp continued. “But then I asked myself whether I should share the story about how I walked into a room full of 50-plus men as the only woman to attend a mandatory coaches’ meeting for my son’s sports teams. Do I tell you all how I sat alone in a corner, assessing the room for safety and listening to such comments about how ‘moms love the work at the concession stand’ or how every team should really just have a ‘team mom;’ because…women love these tasks, right? I then wonder if this story is relevant now, and I remind myself that it is, because this story happened last night.”

Culp also officially thanked SHARPP’s staff, with each name, regardless of position, receiving enthusiastic applause from the crowd and their cowbells. In honor of April being Sexual Assault Awareness Month, the director also read a yearly proclamation denouncing acts of sexual misconduct and violence and stressing the university’s and community’s commitment, through “public and private efforts,” to spread awareness of such acts, hold proven perpetrators of sexual misconduct accountable, and how to help survivors receive deserved services and support.

Activist Sage Carson from advocacy group Know Your IX – which was founded in 2013 and aims to “empower students to end sexual and dating violence in their schools” and inform students about Title IX policies, per its website – also spoke at the event, describing the organization’s purpose and reflecting on her previous experiences being assaulted during her freshman year and taking part in events on campus like “Take Back the Night” six years ago where she had the opportunity to open up about her past and receive support from her peers.

“I resembled more of a shell of a human than I am now,” Carson said as she recalled the aftermath of being assaulted. “…I saw myself kind of curl into myself. I became quiet, I rarely left my room; but in April of my freshman year, I attended our ‘Take Back the Night’ event for the first time, and for that first time, I could also put words to the experience that had left me with shame and pushed me into isolation. I had no idea what to call what I had experienced, I had never heard someone talk about the same things that I had experienced and I never felt community before.”

Carson also led a chant of “we believe survivors” with the crowd, saying she last performed it during the Kavanaugh hearings.

SHARPP Direct Services Assistant Miranda Weaver and Outreach Assistant Shannon Bryan, both UNH students, also spoke at the event, where they thanked the various departments and organizations involved with organizing the rally, explained their roles at SHARPP, recalled how they joined the program and how they were encourage to become activists against sexual violence and for SHARPP’s mission. Weaver and Bryan led the crowd during the march.

Prior to both the march and speakers, attendees could visit tables run by organizations and local businesses supporting the day’s activities, offering foods, games and chances to learn about their organization and why they participated.

“I think that this is really great, maybe even more people than last year,” Vazza said about the event’s turnout as she stressed SHARPP’s intolerance to sexual and other types of violence. “So, we are really impressed and happy that everybody could make it.”