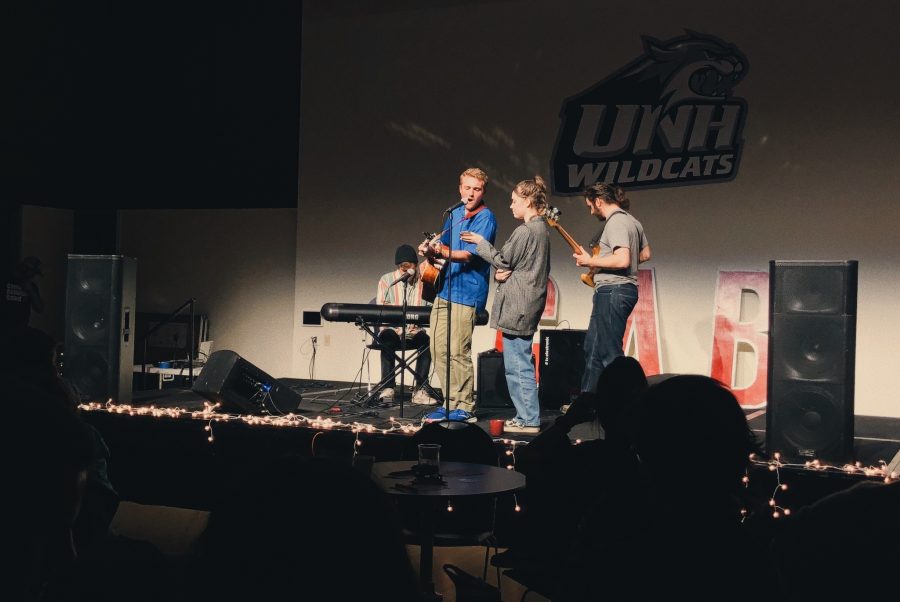 A new venue, a new format and a new roster of talent showcased a new potential direction for the long-running University of New Hampshire (UNH) “Grind” talent show as it experimented with a novel semesterly “Grande Grind” format on Friday, April 5, hosted by the Campus Activities Board (CAB).

The event, held in the Memorial Union Building’s (MUB) Strafford Room instead of its typical home at the MUB Entertainment Center, welcomed a variety of open-mic acts headlined by student indie rock band Daylo to an audience of nearly 50 students. Students interested in performing could sign up by writing their name down on a sheet outside the Strafford Room. Acts ranged from stand-up comedy about the stress of test-taking to original works of poetry about moving on from past relationships to crowd-pleasing covers of Michael Bublé and Billy Joel’s “Piano Man” complete with harmonica, among other acts.

Like previous “Grinds,” CAB hosted a series of raffles offering prizes such as a portable charger; two UNH-branded mugs each paired with a bundle of hot chocolate mix, a white chocolate sauce and various sweets; and a 12-in-1 wooden “Game Center” featuring a variety of board and card games as the grand prize. Throughout the event, CAB staff and event organizers went around to different tables and handed tickets to students, giving all attendees a chance to win. Students also indulged in a selection of foods such as chicken wings, vegetables, including carrots and broccoli, and mozzarella sticks.

The show, also like prior “Grinds,” made strides to replicate the atmosphere of its previous home of the Entertainment Center, with lighting limited to the stage and strings of white and colored lights littering the floor by the room’s balcony door and adorning the edges of the stage. Meanwhile, giant red letters spelling out “CAB” glowed as they leaned against the wall at the back of the stage.

Unlike past shows, however, CAB organizers, such as “Grind” co-chair and junior wildlife conservation biology major Garrett Phillips, sought to try a new approach this semester and experiment with a bigger, semesterly event in a larger venue compared to the smaller and more frequent “Grinds” of the past, which were typically held on a monthly basis.

“We just kind of wanted to restructure it a little bit, see how it would work… we just wanted, like, a fresh take with it,” Phillips, who hosted the event and introduced the different acts, told The New Hampshire, adding that the addition of “Grande” to the title reflects the show’s new size and format. Despite the changes, Phillips stressed that the event still represents an opportunity for students to showcase their talents and passions to the greater UNH community.

“It’s just really nice for students to have a place to be able to play their music in front of peers and people who appreciate the arts,” he said.

The night’s host said that the name of the event will remain the “Grande Grind” as CAB deliberates whether to move forward with the new changes, with director Emma Barresi having the final say.

“Grind” co-chair and junior marketing and business management major Valerie Mattice said she and Phillips split tasks Friday night, with Mattice overseeing the food and managing the event “behind the scenes” while Phillips took on the role of “commentator.”

“We bounced off each other for the past couple weeks to [put on] this event,” she said.

Mattice, who based her stand-up comedy bit about the trials of collegiate test-taking on real events, said she had thought about performing onstage for a while before the event.

“We have an event called ‘Funniest Person on Campus’ in CAB, and my friends are encouraging me to audition for that,” she said, “so I figured I’d give it a try out now and see if I’m actually any good at it because I think I’m funny… but maybe not everyone does!”

Mattice called the “Grande Grind” a “creative outlet” for student voices and talents, as many of her friends took part as performers that night. She also called the show a “judgment free-zone” and a “relaxing environment” due to its emphasis on a “coffeehouse feel.”

“There’s so much talent on this campus and I’m so, so happy that we got Daylo to perform with us and they’re fantastic,” she added.

Attendees also expressed positive vibes about the new “Grind,” such as Denny Ruprecht, a New Hampshire representative and UNH graduate with a Bachelor of Arts degree in political science who currently studies at Plymouth State University. Regarding the show’s new format, he said that it could allow for a more organized event and give students more time to prepare and decide whether they want to take part.

“I think it’s a great event,” he said during the event, “I’m really enjoying the music and it’s great to see the local bands and the talent here at UNH and in the area.” He added that it helps spread greater awareness of on-campus arts and culture.

Another performer, Memorial Union employee and sophomore environmental conservation and sustainability major Sam Kitfield, sung along with Daylo near the show’s end and also spoke positively about the new “Grind.” Friday’s show marked his first time attending such an event.

“I love coming to the MUB; I work here, I live here, I study here, I eat here,” he said. “And playing with Daylo, which is a band I follow pretty regularly… playing with them was really fun… I think that having an open mic is a really good way to get people who either don’t feel comfortable playing or don’t get the opportunity to play in front of people, and it gives them that opportunity.”

Phillips, despite the show’s turnout, said he hopes for more performers in the future, explaining that CAB might attempt other tactics aside from at-the-door signups to obtain a bigger roster for future “Grinds.”

As for whether Mattice ultimately passed the test that inspired her skit:

“I don’t know, I haven’t gotten my grade yet; I’m still waiting,” she said. “I’m assuming I failed it, but… fingers crossed! Maybe I passed.”