On the Spot with Lambda Chi Alpha President RJ Grandstaff 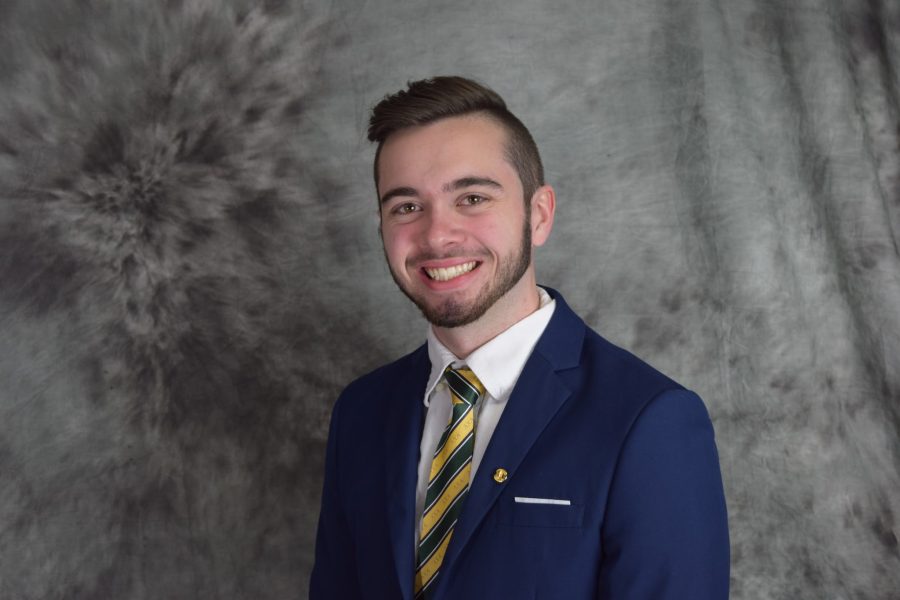 Although presently settled in Durham as a sophomore analytical economics major with a minor in law at the University of New Hampshire, Grandstaff’s childhood did not sit still: he was born in Boston and moved to Maine but was raised in Charlotte, North Carolina and graduated from a high school in Rhode Island.

“I rushed in the fall as a freshman,” he said. “I went out without knowing anybody and here I am. I wanted that brotherhood and friends right off the bat. I didn’t know anybody, only one person came from my high school, and that was my roommate. I wanted a place to belong.”

Grandstaff acquired a position as historian as soon as he joined Lambda Chi Alpha.

“I was responsible for making the composite. We’ve had professional companies do it before, but we saved money because I’m pretty decent with InDesign,” he said. “It was [our] centennial year last year…I went all out for that; it was really fun for me.” Grandstaff would also create slideshows “at the end of every semester as a kind of recap.”

After his tenure as historian, he landed the role of president.

“Pretty much everyone wanted me to. I’m pretty calm and level headed. I’m very objective; I don’t let my biases get in the way,” he said. “I’ve been a candidate ever since I rushed, apparently, which I didn’t know.”

Grandstaff told The New Hampshire about specific goals he’s worked on with Lambda Chi Alpha, including increasing relations with other organizations on campus and focusing more on personally-inspired philanthropy, such as with their recent event, “Kickin’ It for Kidneys.”  The event found the fraternity partnered with the men’s varsity soccer team and together they raised over $3,000 for kidney disease awareness; this marked the first time a UNH fraternity had co-hosted an event with a varsity sports team.

“One of our brother’s dad is affected by that,”he said. “He’s had kidney disease for 30 years. He’s been on dialysis for 15 of those 30 years. He’s already had two kidneys and he needs another transplant. It’s a really personal cause and it was probably our most successful event since I’ve been on campus. It went really well.”

“Kickin’ It for Kidneys” is not the only cause that Lambda Chi Alpha is passionate about. Grandstaff spoke about Lambda Chi Alpha’s national philanthropy, especially with an event called “Feeding America.”

“We put on an annual event called ‘Pumpkin Bust’ at the beginning of the fall semester. We have games and you smash pumpkins and donate but it’s been kind of unsuccessful these past couple of years. Which is why we wanted to do something different in the spring,” Grandstaff stated as a major reason for expanding the fraternity’s philanthropic reach.

“We’ve never really done any spring philanthropies and I think with the success of ‘Kickin’ it for Kidneys,’ we’re just getting the ball rolling with other philanthropies and we’re still going to do that, but probably give our attention toward more personal causes. That seems the way to go,” he said.

One of the events Lambda Chi Alpha held early in the semester raised funds for their national philanthropy.

“We also put on a grilled cheese stand at the beginning of the semester that went towards Feeding America,” Grandstaff said. “We raised a few hundred dollars there. We partnered with Phi Sigma Sigma. We bought all of the supplies and they held it at their house.”

The personal touch of their new approach adds an extra incentive for the brothers.

“You can get more motivation behind it rather than it being our national philanthropy, like we have to do this. It rallies everyone together as well,” he said.

Grandstaff does not plan on seeking re-election next November even with all the success he’s helped Lambda Chi Alpha achieve.

“I’m thinking about going abroad and getting some relaxation; I’m thinking Spain,” Grandstaff said. “I have a girlfriend and she really wants to go to Spain.”

Before he goes abroad, he wants to change the views that some may have of what it entails to be in a fraternity and what a fraternity or sorority does.

Outside of school and Lambda Chi Alpha, Grandstaff is a major fan of baseball.

“I grew up my whole life playing baseball. In North Carolina I played year-round down there. I threw out my arm though. I’ve had two shoulder surgeries and an elbow surgery,” he said. “I was a pitcher. I was just throwing too much. It didn’t tear all at once, it was over time, wear and tear, and I just played through it when it was hurting. I love the game and I wanted to be out there.”

This determination is helpful in other aspects of his life, especially in areas that he is passionate about.