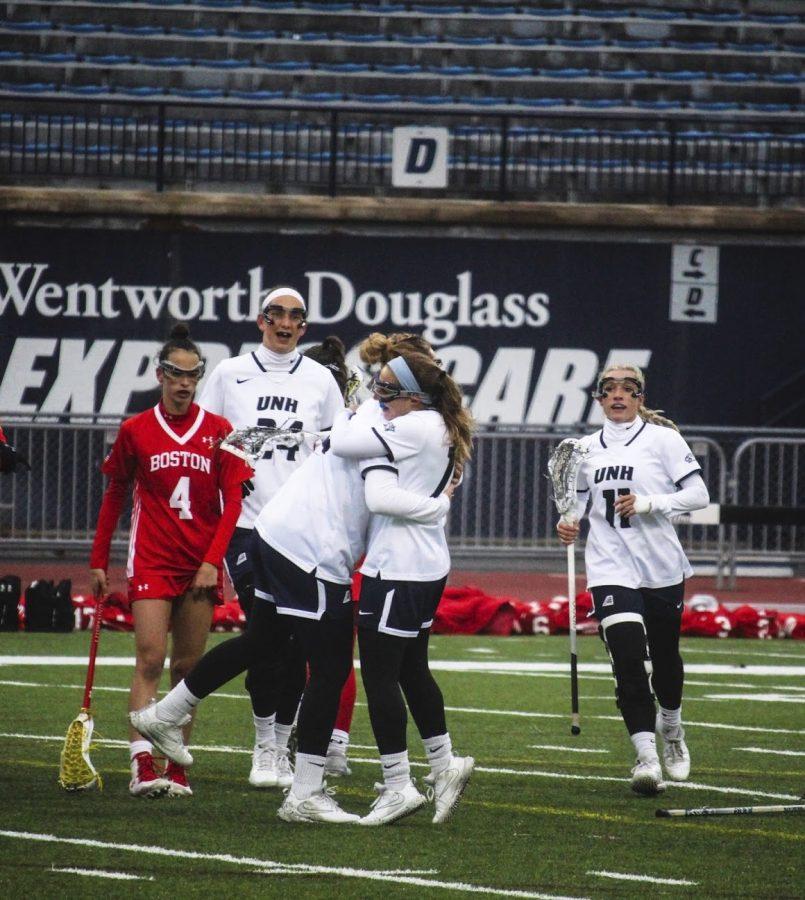 The Wildcats four game winning streak was snapped on Saturday in the closing seconds of a tight game with the University of Albany.

New Hampshire erased the 6-1 first half deficit, but Albany scored the final three goals of the game – including the game-winning goal in the final 15 seconds.

The Great Danes scored the first five goals of the game, dominating the offensive end through the first 20 minutes.

Blanding scored the first goal for the ‘Cats, unassisted, with 7:14 in the half.

Junior attacker Madison Conway scored the first two goals for Albany and struck again in the final 30 seconds of the half to gain a 6-1 lead at half.

Sexton put the Wildcats on the board first in the second half just over a minute in, but Albany reestablished a five-goal lead with 25:33 in the half.

The Wildcats answered with four consecutive goals to cut the lead to 7-6 with 18:03 in the half. Sexton started the rally with an unassisted goal, then set up Neyland for a goal three minutes later.

Albany scored back-to-back goals just 33 seconds apart to push the lead to three with 14:25 in the half.

Sick of playing from behind, the ‘Cats scored five consecutive goals to gain their first lead of the game 11-9 at 7:41.

Graduate midfielder Devan Miller started things up with an unassisted goal, and Leonard followed 57 seconds later off a pass from Blanding. Blanding also connected with Neyland on the next possession for the tying goal.

Senior attacker Mickenzie Larivee gave the Wildcats the lead 10-9 assisted by Sexton, and Blanding capped the run off less than a minute later with her third goal on a free position shot.

Albany was finally able to get back on the board with a free position goal at 6:44 in the game.

UNH turned the ball over with under two minutes of play and the Great Danes capitalized, tying the game 11-11 with 52 seconds remaining.

Albany scored to take the 12-11 lead with 15 seconds left and won the ensuing faceoff to secure the win over the Wildcats.

The ‘Cats returned home for a matchup with Boston University on Tuesday afternoon. After a back and forth matchup, UNH ultimately fell to the Terriers 12-10.

Leonard got things started for the ‘Cats with an early unassisted goal just 49 seconds into the game.

BU didn’t take long to even things 1-1 at 24:18 on an unassisted goal by senior midfielder Kaitlin Belval, but Neyland answered right away to reestablish a 2-1 lead.

Blanding extended the UNH lead to two, at 19:04, and Larivee edged the ‘Cats to a 4-1 lead less than a minute later.

The Terriers cut the lead to one with consecutive goals just 40 seconds apart, Wildcats led 4-3 at 10:50 in the half.

UNH turned the ball over with under 10 to play in the half an BU controlled the possession for a minute before tying the game 4-4 on a goal by senior midfielder Kelly Matthews.

The Terriers scored back-to-back goals 20 seconds later to take their first lead of the game, leading 6-4 with 6:59 in the half.

The Wildcats cut the lead back to one with Larivee’s second goal of the game at 3:10 in the half.

Miller scored her first of the game early in the second half and UNH erased the two-goal deficit to tie the game 6-6 with 27:49 remaining.

Sophomore attacker Bridget McCarthy scored for the Terriers to regain the lead, however, Larivee answered quickly with her third goal of the game.

Boston went on a three-goal scoring run sparked by a free position opportunity where McCarthy found junior attacker Kailey Conry down low for a goal. BU jumped to a 10-7 lead at 13:30.

Miller cut the lead to two goals, shortly, on a free position goal, but the Terriers regained a three-goal lead 22 seconds later.

The ‘Cats, unwilling to give up, scored back-to-back goals from Northrup and sophomore midfielder Gabby Masseur at 5:56 to make the score 11-10.

Boston scored again late to jump ahead two. The Wildcats called a timeout with 1:01 on the clock, but lost the possession shortly after, dropping the game 12-10.

The Wildcats drop to 8-5 on the season with the two-loss week.

The Wildcats return to play on Saturday hosting the University of Maryland Baltimore County at Wildcat Stadium at 10:00 a.m.