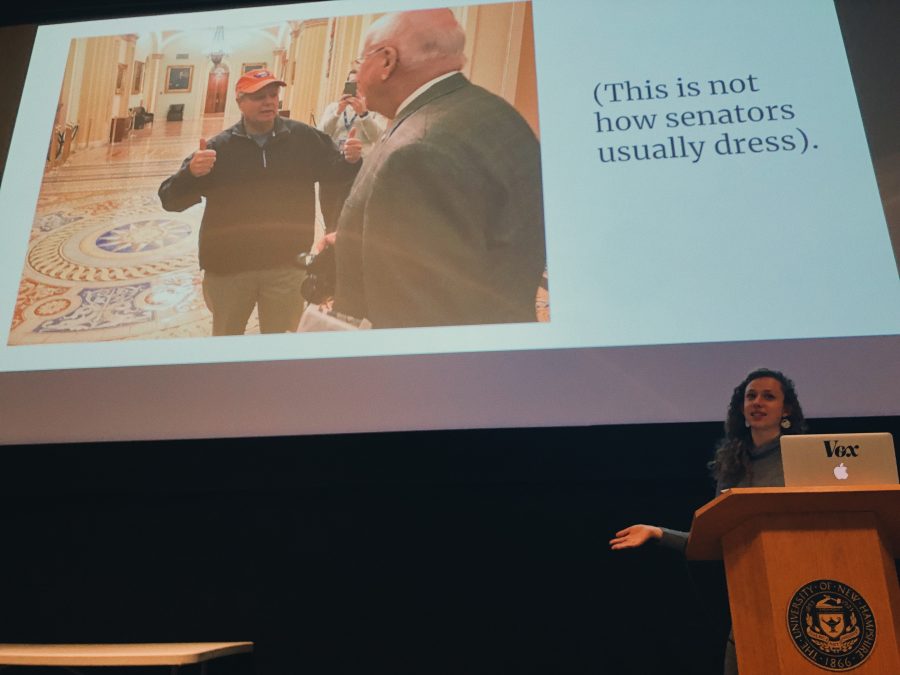 Speaking to an audience of roughly 20 UNH students, faculty and other guests, Nilsen, who graduated from UNH in 2009 with a major degree in history and minors in writing and Asian Studies, discussed her current position as a Washington-based reporter covering Congressional Democrats, taking time to highlight her biggest articles that covered topics such as last December’s government shutdown and Supreme Court Justice Brett Kavanaugh’s contentious and controversial nomination process, among other recent events.

Calling it the “main” part of her talk, Nilsen told the body about her ascension from UNH to Vox, starting with her experiences with journalism courses as part of her writing minor at UNH while also contributing music journalism to Main Street Magazine, interning at New Hampshire Public Radio and working nights at Fosters Daily Democrat. Following this, she obtained her first full-time job at the Keene Sentinel where she primarily covered healthcare and the NH opioid crisis; she called the experience at the Sentinel her “first foundation in journalism.”

“I had a great editor; I had a lot of freedom to pursue projects…to do a little digging and do some investigations, and that was great,” she said.

Nilsen afterwards moved to the Concord Monitor, where she stayed for two-and-a-half years and got the chance to cover the presidential campaigns of Bernie Sanders and Donald Trump during the 2016 N.H. presidential primary at what she called the “perfect time.” Nilsen also recalled a story in which, while seeking to interview then-candidate Trump after a rally, he mistook her for a fan and offered to take a photo with her instead of an interview; she later got a photo of Trump backstage signing a pledge to cut taxes.

“I was really lucky to be a young reporter in New Hampshire at this time because presidential candidates are literally just coming to you,” Nilsen said, “like, you really don’t have to go anywhere; you don’t have to go to Washington, D.C., or anywhere else to cover them. They’re just flocking to New Hampshire; it’s a really great place as a young reporter to get exposed to national campaign coverage and get exposed to…all these political reporters there to make connections.”

Following her time at the Monitor, Nilsen arrived in Washington and, after taking time to adjust to the city’s unique “political bubble,” utilized connections she had made during her time at the Monitor to reach out to outlets like Politico and CNN. After months of job-seeking, Nilsen recalled receiving an offer in Jan. 2017 from an editor at Vox. Nearly six months later, she finally moved to Washington to manage Vox’s daily email newsletter as part of a three-month contract with “no guarantee” of a full-time job. Ultimately, at the end of the three months, Vox promoted Nilsen to a full-time position where she took on general assignment reporting on top of her work on the newsletter before joining their congressional team covering House Democrats after a previous member left their position.

Nilsen stressed that although reaching out to and interviewing key political figures is the meat of her work on Capitol Hill, she spends more time than not waiting for politicians to come to her, especially while crowded and surrounded by dozens of other journalists seeking the same opportunity.

“So, a lot of my job looks like this, which is standing in hallways or walking very fast through hallways trying not to, like, bump into the reporter in front of you as you’re all moving in this mass around whatever member of Congress,” she said. “But…there’s always stuff happening, it’s really interesting.”

For part of her presentation, Nilsen displayed a PowerPoint showcasing her own photos of key figures and events she had covered, as well as images from other photographers and news outlets featuring her in the shot, often seen using her smartphone to capture audio of the scene at hand from politicians like Senate Majority Leader Mitch McConnell (R-KY) and Rep. Alexandria Ocasio-Cortez (D-NY).

Nilsen also offered advice to attendees aiming to pursue journalism or similar fields after college, such as stressing the importance of asking questions and not being fearful of asking “stupid” questions, how to get to know a subject without “befriending” them, and the need to write stories in ways so that readers of varying knowledge of a given topic can understand their content and purpose. After her talk, Nilsen answered audience questions where she gave her thoughts on broadcast journalism, where graduate students seeking national journalism jobs should look for work and make connections, how journalists should cover the Trump administration and its official claims and statements and how to seek out objective news sources and steering clear of “political spin” from both sides.

Nilsen, in an interview with The New Hampshire following the event, said that one of her favorite aspects of journalism is the chance to ask questions and uncover the lives of subjects she covers, but that she is also driven by “the freedom to pursue stories that are interesting to me, to be able to tell stories that I thought were important, and to shine a light on things that I thought needed to be told.” She added that she hopes to write for publications like The New York Times and the Washington Post later in her career.

“I think that those are incredible news organizations that are able to tell really amazing stories and have a lot of resources to do so,” she said.