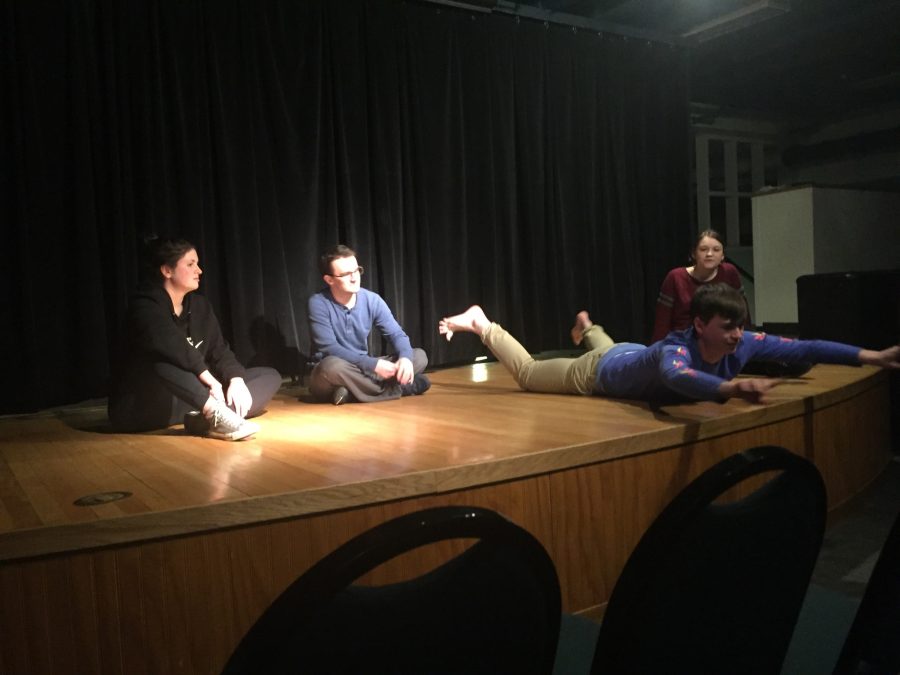 A bank robber, patrons on a delayed Southwest Airlines flight and a “boat joker” took over the Memorial Union Building’s (MUB) Entertainment Center on Wednesday night. They were all part of Sketched Out Comedy’s monthly show.

The show was called “March on the MUB,” which head writer Evan Kelly, a senior political science major, explained: “We wanted to have a protest sketch, and part of it is classic word association,” with ‘march’ for the month of March.

The show consisted of six skits, each a few minutes long, full of parody, absurdity and continuous laughter from the modest crowd of friends and fellow students. Each skit featured a mainstay of current life, and turned mundane moments, like airplane delays, into hilarity.

The show opened with environmental activists who wished to reduce their impact on the planet – to the point of one character saying she was breathing once a minute, as she didn’t want to breathe out too much carbon dioxide. Kelly’s character, Craig, attempted to photosynthesize, arms and legs churning through the air as if he was swimming, but trying to catch light. When a fellow character noted he was photosynthesizing in a basement, Craig replied, “My spirit fungus is nocturnal.”

Absurdity continued in the next few skits. A bank robbery went terribly wrong when one of two robbers, each outfitted with a costume-store fake mustache, sung his demands to the bank teller. He then realized a bank customer was his high school classmate, whom with he proceeded to discuss love and relationships, forgetting the robbery even as the police led him away. Afterwards, two college students – one identifying as a “Pool Major” – waited on a Southwest Airlines plane, which was delayed. The plane eventually got canceled after needing “homemade” jet fuel and having lost and found the pilot.

Sketched Out Comedy even broke the fourth wall. In one skit, a “boat joker,” or a person who “tell[s] jokes about boats,” in presenting at a career fair with his daughter, answered a question from the audience and told them a boat joke.

Sketched Out Comedy concluded their show with two skits that were part of one story. Two adult daughters, brought together by their fathers’ podcast, sat in a shipping container that happened to be an active crime scene and discussed one daughter’s theory that their fathers were in love. One father ran in and proved the theory, saying he and the other father were marrying that night.

That father returned in the last skit to find a note from his future husband. “You’re the lox to my bagel, you’re the feather to my pigeon,” the note read, telling him that he had to come to the baseball field, where his fiancé was playing, to get married. He ran off the stage.

If the near-constant laughter was not evident enough of the audience’s love of the show, Carly Larochelle and Sarah Drake, both junior occupational therapy majors, felt that “it was great,” as Drake said. Larochelle and Drake had come to support Evan, their friend. The show, they felt, was “college SNL [Saturday Night Live].”

Sketched Out Comedy will put on another show during April.