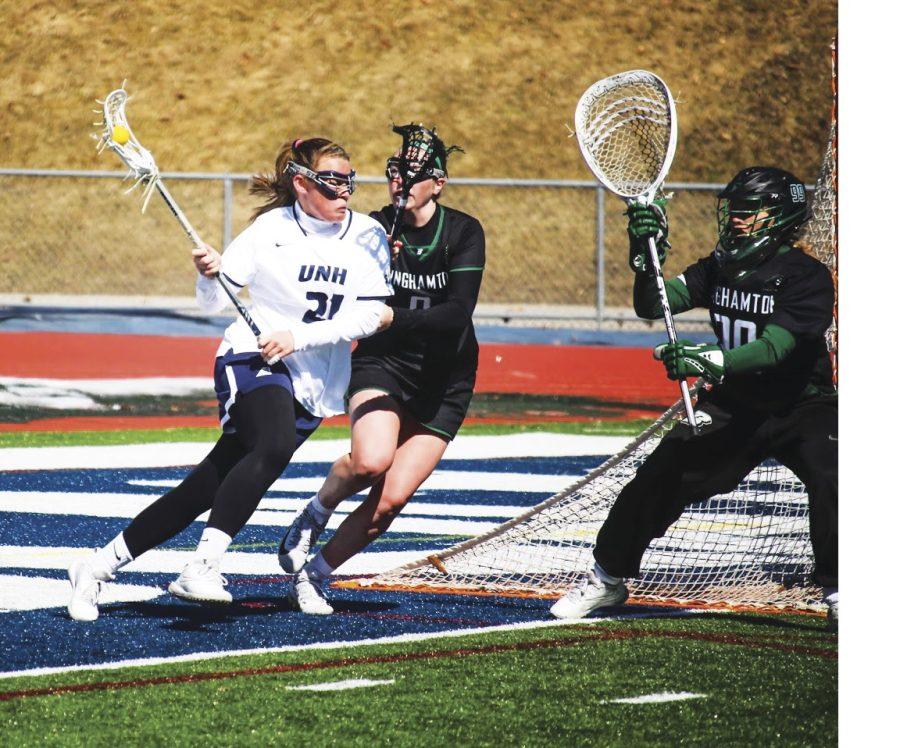 The University of New Hampshire women’s lacrosse bested Binghamton University on Saturday on the back of first-year midfielder Elizabeth Blanding, who recorded a career-high four points to lead the ‘Cats to the 12-10 victory.

The ‘Cats improve to 6-3 overall after the back-and-forth match, and 1-0 in America East conference play.

Leonard put the Wildcats on the board first early in the game on a free-position shot, gaining the 1-0 lead.

Binghamton tied the game at one with 23:09 in the half, however, the ‘Cats went back-to-back with goals from sophomore midfielder Julia Neyland and Blanding, regaining the 3-1 lead.

The Bearcats cut the lead to one on a free-position goal and tied it shortly after on a back-door pass with 13:36 remaining in the half, shifting the momentum.

Less than two minutes later UNH graduate midfielder Devan Miller scored on a great cross-crease move to give the Wildcats the 4-3 lead.

Binghamton answered with another two goals to capture a 5-4 lead with under ten to play in the half.

The ‘Cats took little time to strike back as Leanord sniped the top left corner of the goal for her second of the game and evening the score.

Following the score by Leanord, New Hampshire first-year goaltender Issy Torres made a great save to keep the game tied, which led to a loose ball for Blanding giving the ‘Cats the 6-5 advantage.

The Bearcats evened things up at six with 30.6 seconds on the clock on another free-position goal, but UNH was able to answer with 5.6 seconds left and take the lead going into half off another Blanding goal.

UNH led Binghamton 7-6 after the first half.

The ‘Cats jumped on the board first, again, in the second half with a goal from senior attacker Mickenzie Larivee who got inside the crease with a crafty spin-move and netted the ball, giving the ‘Cats an 8-6 lead.

The Bearcats came back with force, rattling off three unanswered goals in two minutes to climb on top 9-8 with over 20 minutes of play remaining.

Sexton responded with a flashy around the back shot that found its way to the back of the net, tying the game, and then again two minutes later on a goal by Northrup to regain the lead, 10-9.

Binghamton scored another free-position goal with 14:25 left in the game to tie it at 10.

New Hampshire ends its three-game homestand Saturday March 30, as they host the University of Hartford at Wildcat Stadium at 1:00 p.m.