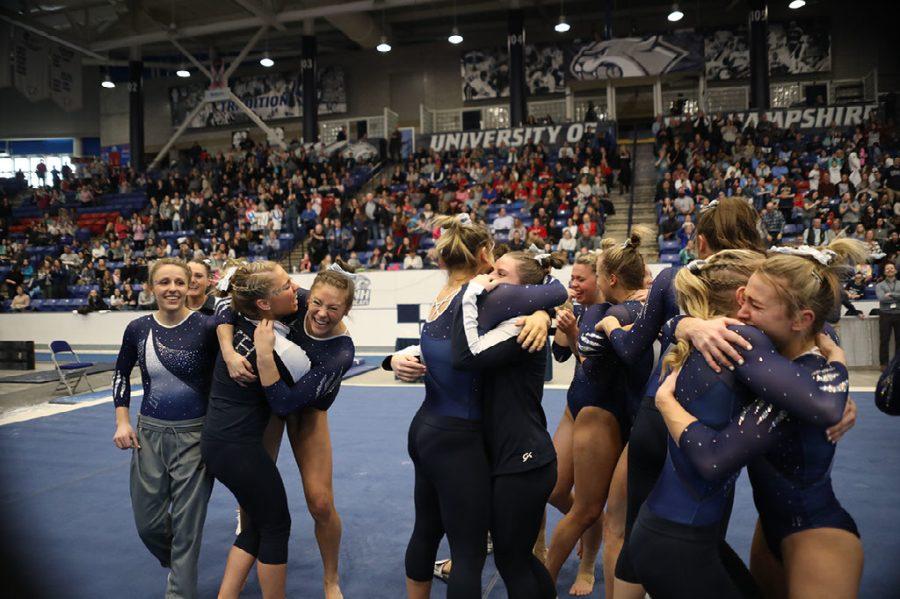 On Saturday, the UNH women’s gymnastics team marched onto the floor of the Whittemore center with one goal in mind, to come out on top of the East Atlantic Gymnastics League (EAGL) competition with a win. The slogan for their season has been “Unfinished Business” and on Saturday, they finally were able to pursue their vengeance of last year’s second place finish. With all six EAGL schools in attendance, the stage was set for the Wildcats.

The ‘Cats would start the first rotation on the vault. Senior standout Danielle Mulligan went right to work as she gave the Wildcats a strong performance right off the bat with her score of 9.825. Following behind her was fellow senior Erin Carroll who also helped set the tone with a score of 9.800. The ‘Cats were off to a good start, finishing the event with a score of 48.800.

After a quick break on the second rotation, they headed for the uneven bars on the third rotation. Junior Ava Watkins got the momentum going for the ‘Cats, scoring a 9.800 in the second spot. Then, first-year performer Hailey Lui was able to step up big and deliver a 9.825 on the bars to keep the squads momentum going. Junior Riley Freehling and sophomore Lauren Diggan were able to score matching 9.850’s on the event, pacing the ‘Cats for a high scoring event. In the anchor spot, Mulligan was able to shine bright, scoring a 9.950. That score tied the record for the highest-score ever in EAGL championship history on the uneven bars. Her performance was one of the spotlights of the day, as many people in the building believed she deserved a perfect score of 10. The ‘Cats finished the event with a 49.275, leaving the bars with very few errors and putting them in a good position heading into the balance beams.

On the balance beams for the Wildcats, first-year Hannah Baddick and junior Emma Winer were able to start strong in the first half of the performers as they scored matching 9.750’s in the two and three spots, respectively. After an uncharacteristic fall on the beam from their star, Mulligan, the ‘Cats seemed a little nervous as Lui approached the beam. In the last spot, however, Lui was able to shake off the nerves and deliver an incredible performance to get the ‘Cats right back on track, scoring a 9.825. When asked about the team’s performance on this event Coach Goodspeed said, “We were a little shaky on beam today, our beam team is much better than they performed,” but further continued to complement the team stating “It’s different people who have made mistakes through the year, other people have stepped-up to cover for them.”

After another bye in the fifth rotation, the ‘Cats headed for the floor exercise on the sixth and final rotation of the day. With the ‘Cats neck and neck in score with George Washington and N.C. State, they would need to perform their best to close out the win. Senior Nicole O’Leary started off for the ‘Cats with a strong score of 9.825. Next up was Lui who once again delivered, scoring a 9.850. With the match on the line, the last two performers were able to come up clutch, Freehling scoring a 9.850 in the five spot, and Watkins leaving no doubt in the six spot, scoring a 9.900, tying the highest-score of the match. “This team is competitive when it counts, and steps up when they need to,” Head Coach Goodspeed said of his squad.

The ‘Cats huddled up as a team waiting for the final results to be posted on the board. In dramatic fashion, the ‘Cats were able to top all other EAGL competitors and secure the championship win, finishing with a team score of 195.950. The celebration was sweet for the ‘Cats as all their hard work finally payed off on their home arena floor with Wildcats fans cheers raining down on them.

“It’s always good to be home,” Goodspeed said right after the match.

The ‘Cats finish their home season with a perfect 14-0 record. The team will head down to Atlanta next Friday, April 4 to compete against N.C State one last time in hopes of getting a birth into the Saturday regional championship quad meet.