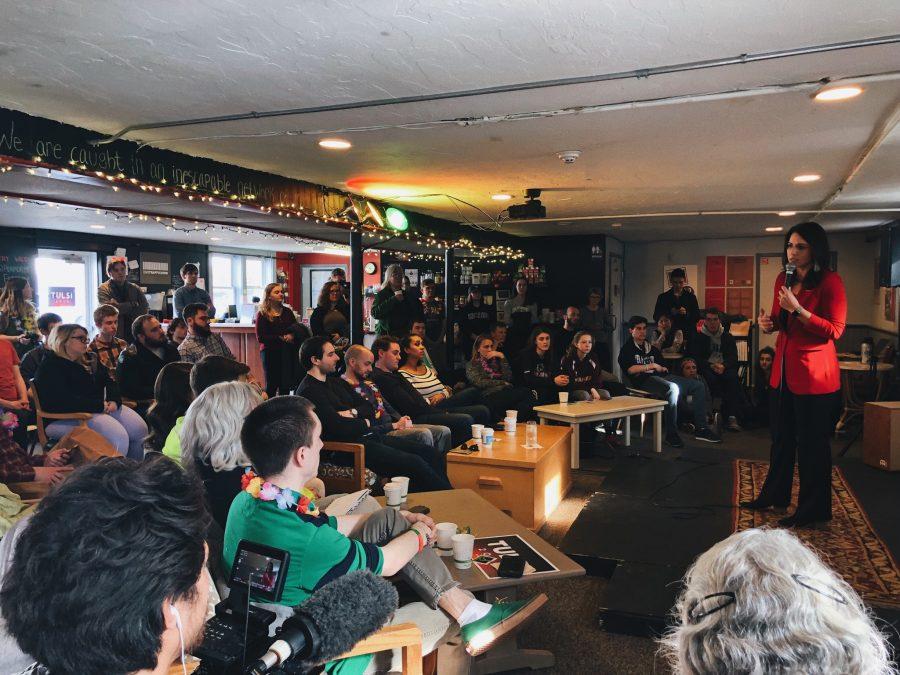 As Democratic presidential candidate and Representative Tulsi Gabbard (D-HI) stressed her opposition to what she saw as America’s “wasteful” war-centric foreign policy at a rally at Durham’s Freedom Café on March 23, she shared a story about the late Republican congressman Walter Jones of North Carolina who started out as “one of the most ardent supporters” for America’s resolution for the “regime-change” war in Iraq in during the early 2000s following 9/11. In 2003, per Gabbard, the congressman attended a funeral for a marine killed in combat and watched as the late soldier’s wife, accompanied by their three kids, read the last letter he sent them.

“He was so struck and moved by this realization of the cost of war and who was paying the price and that those three little kids would never see their father again, he dedicated himself and the rest of his life to fighting in Congress to make sure that we do not wage anymore of these wasteful, destructive regime-change wars,” Gabbard told her audience on Saturday. “He challenged his own party, he challenged leaders in both parties…he sent handwritten letters to every single family of every service member that was killed in Iraq and Afghanistan; we wrote over 11,000 letters.”

Gabbard added that both her and Jones co-sponsored the ‘No More Presidential Wars Act’ as an effort to “reclaim the responsibility Congress has [and] to be the body that declares war, to end these presidential wars that are being fought without the authorization of Congress.”

“He took every opportunity that he could to apologize and express his deep regret for that vote he took…he said it was the biggest mistake he ever made in his life…So I tell this story because people like Walter Jones…saw of the error in his ways, and he…spent the remaining years of his life doing his best to make up for it. That’s what matters the most. So, for those who voted for that Iraq War…who never once apologized for that vote that they took…to the families who lost their loved ones in that war; to me, that is the kind of change and I would like to see. If someone is asking to serve…as president and commander-in-chief, if they took that vote, what have they done since then? Do they recognize how costly and how destructive it has been? If not, no, they don’t deserve to be commander-in-chief.”

Her story, accompanied by applause and continued calls from Gabbard for a fuller understanding of the full reach of the nation’s foreign policy for those seeking the White House in 2020, served as the heart of her Saturday rally.

The event drew in nearly 100 University of New Hampshire (UNH) students, residents and journalists, who crowded the small yet popular hangout and entertainment venue to hear out the congresswoman’s promises, her past experiences and why she believes she deserves her party’s nomination in a tight race already chalked full of over a dozen notable and controversial candidates.

During her speech, Gabbard mostly focused on her presidential plans to changing America’s current foreign policy to lessen the “cost of war,” which she described as the “central” obstacle affecting the nation’s ability to achieve its long-term goals. The representative took time to criticize the government’s withdrawal from the Iran Nuclear Agreement, its current use of “trillions of dollars that are taken from our pockets” spent on increasing America’s nuclear arsenal in a “new cold war” against powers like Russia and China, as well as engaging in conflicts with foreign militant organizations perceived as threats to national security in countries like Iraq, Israel, Palestine and others to the benefit of what she called the “military industrial complex” and to the detriment of the American people and issues at home.

“Now unfortunately, you don’t hear much talk about this,” Gabbard told the crowd. “You might hear about it from veterans; you might hear about it from service members, people who are directly paying the price for these wars, these wasteful regime-change wars that our country’s been waging for far too long, wars that…undermine our national security and wars that actual increase the suffering of people in the countries where we wage them.”

Gabbard also pointed to President Donald Trump’s latest budget announcement in which, in her mind, aims to increase military spending while cutting funds for education, food stamps, healthcare and housing, using this to attempt to prove her “point” that foreign policy is not a “far-off issue that sits alone.”

The congresswoman additionally highlighted the importance of voting in future elections, especially stressing the significance of millennials and their status as the largest voting demographic for the first in the country’s history.

“…For a lot of us – and this is something that I’ve experienced a lot of different times in my life – is the so-called ‘adults’ in the room will say, ‘well, you know what, you’re too young,’ and, ‘why don’t you wait your turn,’ or, ‘you really don’t have a seat at the table for your voice to be heard.’ All of that is changing as we speak, because it is really our future that we’re talking about,” Gabbard said. “The changes we are talking about making, the direction that we need to take our country [in] is one that is not just shifting the current policies a little bit here and a little bit there, but really redirecting and making the kind of systemic change that we need to see on a whole host of issues.”

While foreign policy made up the bulk of her appearance, the candidate also referenced domestic issues, mostly during a Q&A with the attendees that packed the café Saturday; topics ranged from reproductive rights and her stance on the Helms Amendment – which prohibits government spending on abortion care – to her positions on student tuition and free speech on college campuses.

“We’ve got to make sure this higher education is accessible for everyone,” Gabbard told The New Hampshire concerning the former subject in an exclusive discussion following the rally. “I’ve supported legislation like the ‘College For All Act,’ which seeks to make sure that those who are earning under a certain income level are able to get free tuition to public institutions.” She also expressed her plans to aid those both in college and those not seeking a college degree right out of high school looking for vocational work, as well as how to utilize advancements in technology to make college less expensive for students.