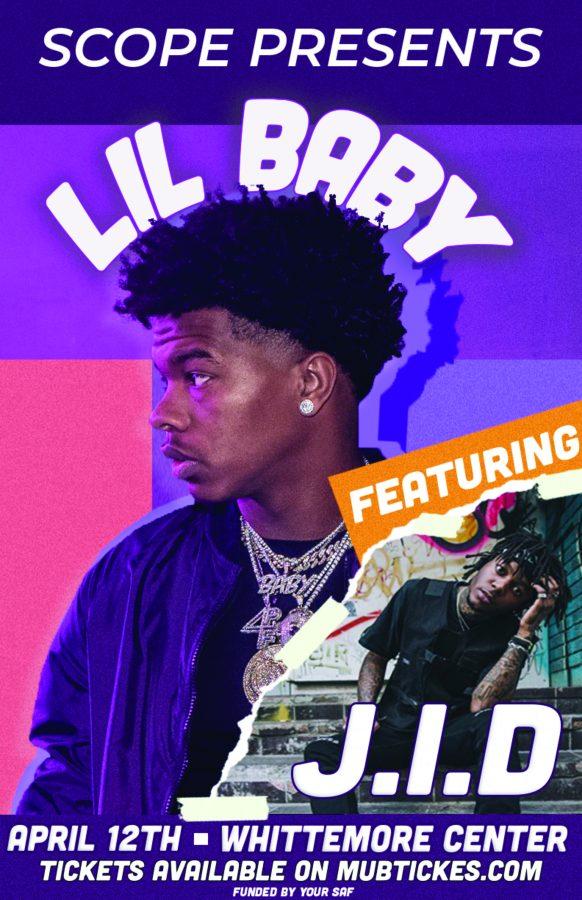 The Student Committee on Popular Entertainment (SCOPE) announced today the headliner for UNH’s spring concert, Lil Baby, with semi-established rapper J.I.D set to open Friday, Apr. 12. Lil Baby is known for his two major tracks “Yes Indeed” and “Drip Too Hard” which peaked at six and four respectively on the Billboard Top 100 chart following the release of his first and only album.

In returning to rap SCOPE is aiming to improve turnout from
the low numbers it saw at last semester’s Cheat Codes show. The fall concert was
the first time in years a SCOPE performance hasn’t sold out but those in charge
of handling talent recruitment have high expectations this time.

“It’s tough . . . we have people in SCOPE who are so alternative [genre]-oriented which can make things a little frustrating to coordinate, but the most important thing is that we bring what the students want.”

Giordano assured that her organization hears suggestions by
students submitted through an online survey and other times discussed during
SCOPE’s yearly info sessions. The survey is made available on the committee’s
Twitter feed during the early months of each semester.

Based on campus’ reaction to the Cheat Codes concert, Giordano said, SCOPE wants to dispel perceived strain among itself and the general public to establish a stronger relationship.

“I don’t think there is a strain between students and SCOPE,”
she said. “There’s a misunderstanding about prices. Every year people want
Travis Scott, Post Malone, but that’s just not within our budget. I wish
students had a better grasp of how the process works. The odds that the four
dates we have [as scheduling options] line up with everyone’s’ preferences is
so slim.”

Giordano went on to explain the process of choosing an artist which revolves heavily around budget flexibility.

“Booking a show for a college is like putting a puzzle together,” she said. “You have what we want, as SCOPE, what the students want and what dates the Whitt has available for us. That’s tough with hockey because that’s [the Whitt’s] priority especially when the team’s doing well. All of these moving pieces have to come together to be a perfect match.

“I do wish people attended our info sessions every year to better understand how our process works, but we try to be as transparent as possible through social media. Said and done it is a very long and grueling process.”

Rapper Trippie Redd was scheduled to perform alongside Joey
Bada$$ and Lil Uzi in last spring’s set but never showed because, as SCOPE officials
attest, his flight was canceled due to weather.

“We sat and stared at Delta’s [Airlines] website as they
cancelled the flight,” Giordano added. “It was a huge bummer, but he’s
notorious since then for not showing up. If we’d known that he had issues with
time management we wouldn’t have booked him.”

Trippie Redd’s no-show was a disappointment for those who bought tickets and expected three performances. Artist reputation and management is now of central importance to SCOPE as to avoid last-minute dropouts or unexpected news in the future. Lil Baby and J.I.D, while still on the rise, are well respected in the industry.

“We look for artists now who’re very reputable,” Giordano said. “It’s the management that’s important, and our manager knows who to stay away from. [Trippie Redd] was someone we should’ve stayed away from. But I think, and I’m excited, that we’re bringing in an artist that will be the biggest name in the next year.”

J.I.D is known for signing to J. Cole’s Dreamville Records and Interscope Records, plus featuring on several of J. Cole’s popular songs. The 28-year-old is co-founder of musical collective Spillage Village alongside EarthGang, who performed at UNH last year, and five other artists. The group is based out of Atlanta, Georgia, and released its most recent album in 2016.

Lil Baby has industry ties of his own. His latest album was
well received in part because of high profile features by Drake and Never Recover,
which led to his mixtape’s subsequent release under the labels Quality Control,
YSL Records and Motown Capital.

“I think on its own, this concert will sell out more quickly [than the fall concert] because it’s a more demanded genre as opposed to EDM,” Giordano continued. “If that’s what the students want, it’s our job to bring what 5,000 students want to see and not what a couple hundred do. I always weigh the students’ [opinions] more heavily in situations like this. We’re here to bring the most mainstream that we can on a low budget.”

Giordano’s hope is that Lil Baby and J.I.D will have blown up in popularity by this time next year, putting them “in that out-of-budget category even though we got them for less.”

Tickets will be made available for purchase next Tuesday, Mar. 26 to students and faculty.