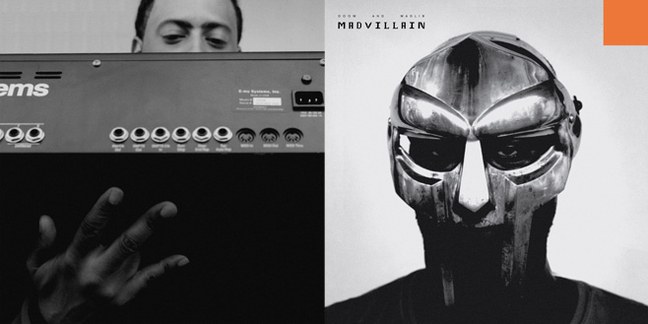 “As luck would have it, one of America’s two most powerful villains of the next decade has turned loose to strike terror into the hearts of men… Two historical figures, outlaws and desperadoes at that, the villainous pair of two really nice boys who just happened to be on the wrong side of the law.”
This is how “Madvillainy,” the unimaginably influential and endlessly celebrated underground hip-hop collaboration album between rapper MF DOOM and producer Madlib, begins – and it couldn’t have started off on a more perfect note. Between a 1931 Frankenstein vocal sample, a sample from jazz composer Sun Ra (who happens to be Madlib’s idol) and a beat so maleficent it could make Hannibal Lecter’s skin crawl, “Madvillainy” kicks off in a fashion only it could accomplish: with the sonic version of a villainous smirk.
“Madvillainy,” released on March 23, 2004, brought together the gladiator-mask-adorned Long Island rapper MF DOOM with one of hip-hop’s all-time best producers in Madlib. What ensued was one of the weirdest and most cerebral albums to ever exist – that seems to exist in an entirely different plane of existence as it is.
At first glance, “Madvillainy” is incredibly easy to cast off. When I first heard it, I didn’t know what to think; what was I supposed to make of some overweight, older guy wearing a gladiator mask routinely rapping words like “Goony goo goo, loony cuckoo” and “egads.” Yet, once I embraced the album’s oddball tendencies and understood its context, I soon was able to understand that each and all of its weirdly-shaped edges and unique complexities have a purpose, and a stunning one at that. 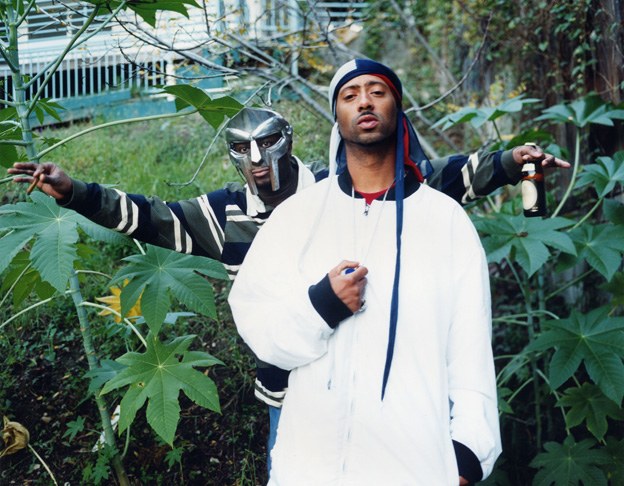 The album that I once thought was simply abstract fodder for music critics to suck on soon transformed into one of my favorite albums ever and what I believe to be the magnum opus of two of the world’s best and most off-kilter minds to ever create music. Before getting into the nitty-gritty of the album and all of its tenebrous wonders, however, one must understand the story behind its two perpetually-stoned architects, MF DOOM and Madlib.
DOOM is a hermit and a self-deprecating silhouette of hip-hop, created both to mock its terrible Y2K tendencies and to deliver tight rhymes in an uncommon package people weren’t used to receiving. Yet, maybe most importantly, DOOM is a character constructed out of thin air by Danielle Dumile.
Dumile is a now-48-year-old jazz-bedeviled lyrical extraordinaire whose roots begin in Long Island, New York. Although British born, Dumile grew up in Long Island and got his start rapping in the group KMD under the name Zev Love X. KMD included Dumile, his brother DJ Subroc and rapper Rodan. After his brother’s death in 1993, Dumile ostensibly disappeared from the music scene for five years, a period best be described by Pitchfork contributor Jeff Weiss when he wrote: “A half-decade of darkness followed. All we really know about these Sinai wanderings in Strong Island is that the originator of the gas face fathered a child, wrote dozens of raps that never saw daylight, and grieved over obscene quantities of malt liquor and jazz.”
Then, in 1999, Dumile – after popping up at random New York open mics wearing women’s stockings over his face – reappeared wearing a gladiator-style mask that had an alcohol-allowing aperture and enough rust to give unwise enemies who got too close a healthy case of Tetanus. Dumile also had a new name – or more accurately, a new character – in MF DOOM, who was molded after the Marvel Comics’ villain Doctor Doom. The mask allotted Dumile anonymity and the freedom to explore his darker, offbeat creative side through rhymes that tracked the escapades of a supervillain on a perpetual world-takeover mission who garnered a lack of morals, a proclivity for Phillies blunts and Old No. 7 and an unmatched skill for writing coded bars.
To this day, there exists almost no pictures of Dumile’s face past the early 1990s and the public knows little to no details about his personal life. Rather, DOOM exists as an enigmatic augur who has the ability to spin tales out of cannabis-clouded air and enchant audiences with his silky-smooth flow. Dumile, on the other hand, is an author who writes vignettes about a masked villain living within a genre full of heroes and chest-puffers who admit their own flaws and still remain proud. On the flipside, DOOM isn’t proud as much as he is evil, and would rather cast aside the me-first mentality of rap through a masked-alter-ego that satirizes the genre while pushing its artistic potential to the limits.

On the other hand, Madlib is far more visible. While being fairly forthcoming about his personal life and background, Madlib, born Otis Jackson Jr., is a now-45-year-old producer who has gone down as one of the best beat-smiths to ever lay his hands on a sampler. Born in Oxnard, California, Madlib’s backstory matters much less than DOOM’s to “Madvillainy’s” mystique, but what does matter is his penchant for jazz and unconventional endeavors. Releasing albums under the fictional jazz collective Yesterdays New Quintet, which is actually comprised of only himself playing all of the instruments and arranging all of the sounds, and the imaginary alter-ego Quasimoto, who is an animated yellow-creature that raps in a helium-altered, high-pitched version of Madlib’s voice, Madlib showed he had the creative chops of an abstract art class on steroids – the perfect pair for Dumile’s florid evil twin.
“Madvillainy” is many things: it’s a Saturday morning cartoon chopped up with Madlib’s sampler and sprinkled into a gutted Backwoods; it’s a noir-film tripping on psychedelics; it’s two musical geniuses opting to trust their audience’s intelligence by creating a heinous odyssey fully equipped with musical theatre references and beautiful jazz samples.
To tell the truth, it’s not quite one specific thing at all. Rather, it’s what happens when you give two weird, savvy minds the space and resources to allow their creative muscles to flex-out, faint and subsequently hallucinate visions of musical depravity. 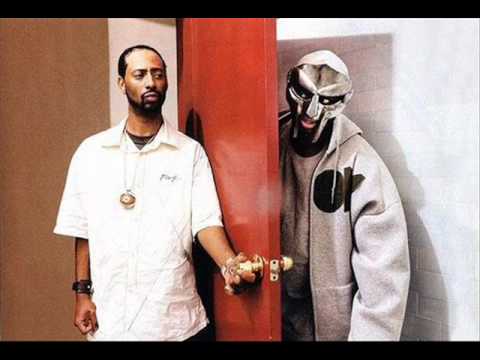 DOOM commits countless villainous acts on “Madvillainy,” but here are some of the best: he gets more cheese than Doritos, Cheetos or Fritos; spits enough lightning to rock shock the boogie down to Brighton; turns a Newport Light to a joint right before your eyes; shows up to class with Moet in a flask; casts the last stone; wrote his rhyme lightly off of two or three Heines; has more soul than a sock with a hole; steals his own girlfriend from himself through his other alter-ego, Viktor Vaughn; departs in a jalopy after rocking a party; shines with the nine; and has enough rhymes to spread throughout the boundless universes.
Whew.
Through this extravagant bucket list of things Dumile has his imagined character complete, what makes “Madvillainy” so impressive is its range and scope. On “Accordion,” DOOM references Sigmund Freud while discussing how he’s going to take over hip-hop; on “Shadows of Tomorrow,” Madlib incants a metaphysical hymn about what time really is; on ‘Strange Ways,” DOOM breaks down the politics of drug laws, police, wars and differing religions. It covers so much in such abstract fashion, that all you can do is marvel at the beautiful absurdity. It really is more than an album; it’s a creative manic episode that two people had at the height of their genius.

It’s extremely challenging for me to put into words how important “Madvillainy” is to both myself and the thousands of other hip-hop-obsessed weirdos that have been enchanted by DOOM’s tightly-woven diabolic escapades and Madlib’s intricate, jazz-infused, psychedelically-soulful audio canvas for 15 years now. Through influencing the likes of countless current-day musicians, whether it be critical darlings like Earl Sweatshirt, Joey Bada$$ and Tyler, the Creator, or mainstream successes like Mos Def and Drake, or literally anybody who has ever held a microphone, “Madvillainy” exists as a parallel universe to ours; one that contains Madlib-spawned skits that detail muscle-bound karate experts who conceal razor edges that lop the heads off of marble statues and DOOM-born lines that describe himself as “the rocket scientist with the pocket wine list.”
“Madvillainy” is one of the best rap records to ever exist, and one of the best albums to ever exist, period. And to think the entire album was scribed “in cold blood with a toothpick.”
On second thought, it’s too thick. 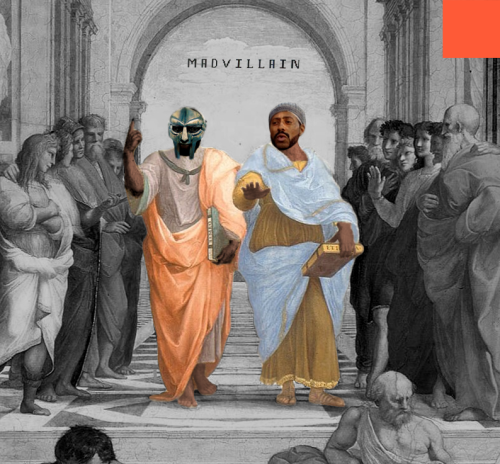