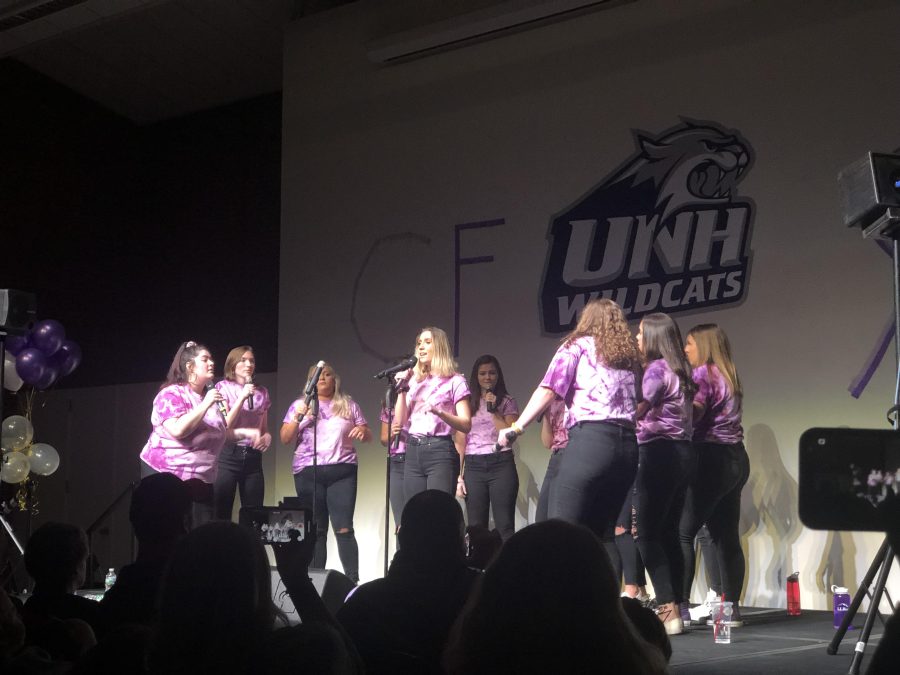 Amanda Mullen’s little sister, Ava Beaulieu, has been battling cystic fibrosis, a genetic disorder that hinders the lungs, for the entirety of her 8-year-old life.
On Sunday, March 3, Beaulieu’s older sister and the rest of female a capella group Maiden Harmony – along with several other University of New Hampshire (UNH) student organizations – attempted to make a difference in both her life and others with CF by hosting a benefit concert with 100 percent of the proceeds going to the Cystic Fibrosis Foundation.
The Fight Cystic Fibrosis Like a Wildcat benefit show was co-hosted by two of UNH’s a cappella groups, Maiden Harmony and Not Too Sharp. Seven groups performed at the event.
Mullen, a senior accounting major, gave a heartwarming opening speech before UNH’s Alabaster Blue opened with a cover of Bruce Springsteen’s “Dancing in the Dark.” Mullen introduced her “sassy” sister, who sat in the front row with her parents, grandmother, aunts, uncles and Mullen’s coworkers. Jamie Seyler, who works with Mullen at a Texas Roadhouse, said, “I’m here to support her and her sister and family and to raise awareness. “
Beaulieu sported a gold tiara and a purple tie-dyed T-shirt, matching the Maiden Harmony and Not Too Sharp members. Purple is associated with cystic fibrosis awareness, hence the purple streamers, balloons and “Ava’s Aces” bracelets for sale.
Cystic fibrosis is a genetic disorder that hinders the lungs, creating mucus that makes it difficult to breathe over time. Mullen explained in her speech that everyday life is harder for those who suffer from the disease, but uplifted the crowd by adding, “If we can make things a little easier for them, let’s do that.”
Alabaster Blue’s performance was followed by one of UNH’s all-male a cappella groups, The New Hampshire Gentlemen. Introduced by senior recreation management and policy major Alyssa Porto, who emceed the event, The Gentlemen made the audience swoon with Sean Kingston’s “Beautiful Girls.” UNH’s Off the Clef and Sisters in Step followed.
Intermission provided opportunity for the audience to eat the donated wraps from Subway, participate in the raffle, or indulge in the purple cupcakes that Linda “Nanny” Leclerc baked, grandmother of first-year biomedical science major and Maiden Harmony member Rylee Saunders. Leclerc and her daughter, Katie Ouellette, made the trip from Maine to watch Rylee perform.
“I was very excited when [Saunders] told me about the event,” Ouellette said. “I was really excited to come down and get to see her on stage.”
Leclerc was one of the lucky basket winners at the end of the show, taking home Not Too Sharp’s basket of their own CDs, water bottle, and pens.
Junior communications major Katie Auger, a Maiden Harmony fan, said that she has never missed a UNH a cappella event. She loves listening to people sing, and thinks Maiden Harmony is especially talented.
“I think it’s awesome that Maiden Harmony picked a cause that is so close to them. It’s great to see these organizations doing what they love to raise money for a good cause. This is great for the community.”
Maiden Harmony consistently supports the Breast Cancer Research Foundation, putting on their fifth annual benefit concert for the foundation last November. Not Too Sharp also hosts an annual benefit show for the American Cancer Society. The two groups teamed up at the end of last semester, though, to plan the joint event for a cause that was a little more personal.
Maiden Harmony’s business manager Kerrianne O’Reilly, a senior hospitality management major, took the lead on planning the show. She coordinated with UNH alum Tony Burke, who does the sound for the groups’ events. Burke discounts the groups for their benefits concerts.
“We don’t make any money from these shows,” O’Reilly said, adding, “This show was way bigger than our November one, which I am so happy about.”
President of Not Too Sharp and senior business administration major Ben Pollack spoke for the entire group when he said, “We are so honored to be co-hosting the event with Maiden Harmony,” who has referred to the Maidens as their “sister group.”
Porto provided mutual support for Not Too Sharp, referring to the men as “the best guys we know,” and graciously thanking them for their contributions throughout the show.
Not Too Sharp’s music director and junior marine, estuarine and freshwater biology major Matt Derrick added, “It feels really good…getting to be a part of something so personal to us.”
After intermission, Notes Over Storrs from the University of Connecticut made their mark in Durham.
Not Too Sharp followed the UConn group, opening with Brett Eldredge’s “Don’t Ya.” The Maidens cheered their friends on from the sideline, dancing throughout the set. They lined up and high-fived the Sharps as they exited the stage.
Applause broke out as the Maidens took the stage for the final set. They opened with King Princess’s “Talia,” followed by TLC’s “Waterfalls.” The finale was led by Mullen, glancing at her family with tears in her eyes, singing Katy Perry’s “Unconditionally.” As soon as she sang the last note, Porto said into her mic, “Okay, I’m crying…Amanda is my best friend in the entire world.”
The benefit show represented Mullen’s assertion that “sometimes individuals don’t think that they can make a difference, but we are able to just by being here tonight.”