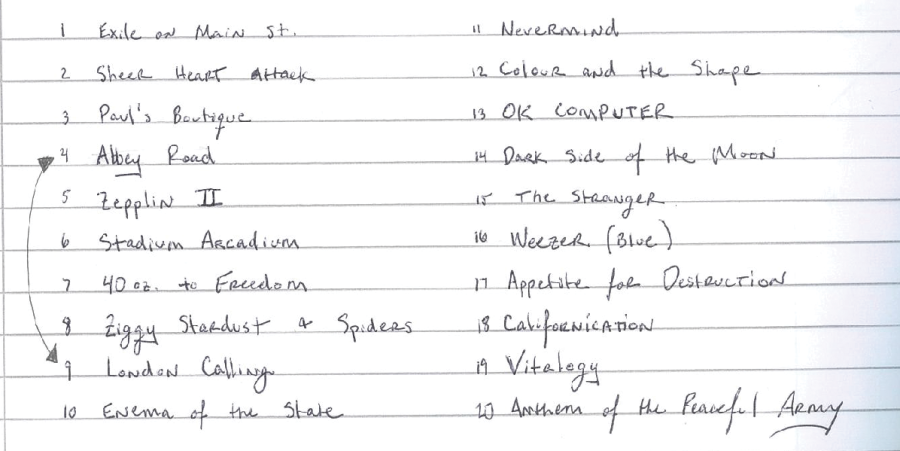 I started at the Rolling Stones with this album toward the end of my sophomore year in high school. That was around the time my dad and I got really into golfing, (he’s parring most holes while I slice rockets into the woods and thereafter frisbee my iron in the same direction). I probably would’ve repressed those days due to shame of loss if not for “Exile.” The opening licks on “Sweet Virginia” take back to Buckmeadow Golf Club, plunging my hand in questionable waters to retrieve a neon “Noodle”-brand ball that wasn’t mine. Mine was always un-retrievable.

I can’t think of a better album top-to-bottom than “Exile” and you’d be hard-pressed to name a weak link out of its 18 tracks. Lead-in songs “Rocks Off” and “Rip This Joint” set the tone for a country-blues record that can lean in either direction — and hard — to snap traditional genre tropes. Contrasting the first songs’ bluesy style are “Casino Boogie,” “Torn and Frayed” and “Sweet Black Angel” with their unmistakable southern kick.

The Rolling Stones did country music better than Americans ever have, and only Keith Richards really cared about it.

Mick Jagger and a few other Stones members were notably upset by this album’s success because they felt it strayed too far from their roots. Jagger called it “Keith’s baby” because the guitarist practically took charge of the record’s writing and performance aspects. It took the band so long to record “Rip This Joint” — issues ranging from staying on tempo to perfecting Richards’ image — that the band nearly abandoned the song. They ended up recording several of the instruments for that one in a bathroom. Drums in the tub, the whole deal. “Rip This Joint” made it onto the finished product but the band never plays it live.

The last quarter of “Exile” draws from gospel, which the band had done before (“You Can’t Always Get What You Want”) but never with so much confidence. “I Just Want to See His Face,” “Let It Loose” and “Shine a Light” help to close out this masterpiece of an album with a finality I’ve never heard in another piece of work.

It used to be a rule of mine to save “Exile On Main St.” for the summer because it fits those months so well, but I’ve realized it’s an involuntary. This is the greatest album of all time and neither New Hampshire seasons nor my golfing attribute to that. In other words: No context needed.

This is the first Queen album I ever listened to in full. Everyone knows their big hits, the ones you heard on “Kiss 108” from the back seat of your mom’s car as a kid. Never liked “Another One Bites the Dust” or “We Are the Champions” then because they were either too short or played too often — every sports team had that one kid who freakin’ loved “We Are the Champions.” Like . . . we won a little league baseball game in six innings due to rainout. Are we really the champions?

In either case, I got it in my head that Queen was soft. Still feel that way about their most popular stuff, actually; never quite warmed up to “We Will Rock You” despite how much I love the rest of “News of the World.”

“Sheer Heart Attack,” though . . . that’s gold. “Brighton Rock” houses a blistering solo that I’ve nearly perfected on air guitar. “Flick of the Wrist” and “Now I’m Here” get dangerous if you’re somewhere quiet because you’ll need to crank the volume way up. “Stone Cold Crazy” comes at you like nothing else in Queen’s discography. Second best here.

The Beastie Boys’ second major effort came after their fallout with Def Jam and Russell Simmons, so they remember “Paul’s Boutique” as an uninspired work born of spite.

This is the best rap album to come from the ‘80s. The Beastie Boys escaped their early party-animal reputation that came with their first LP, “License to Ill,” and returned with lyrical force. “Paul’s Boutique” entrenched the Beastie’s presence as a rap group and you don’t need to look past “Car Thief” to know why: These guys figured it out early. Read the bars along MCA’s “A Year and a Day” sometime for a clue-in of how crafty this group is.

Ad-Rock and Mike D wrote a book on their career but also focused on how talented MCA was at everything he set his mind to. Any fan of these guys needs to read it.

My picks might be a matter of personal opinion and I know everyone’s list will differ, but this belongs on every single one. If you haven’t listened to “London Calling” all the way through at least once, you won’t understand what I’m talking about. In 1979 the punk scene was limited to underground venues where only a handful of groups managed to grow (Misfits, Black Flag, etc.) because of the niche and limiting aspects of the genre.

The Clash changed it all. Incorporating jazz, rockability and reggae into their double LP “London Calling,” this British group lifted punk music from the trenches. They made it accessible.

P.S. These guys liked rap. They have a lot in common.

This isn’t their best album from a talent perspective but it is my favorite. Bonham isn’t at his mash-est, Plant didn’t reach his peak until somewhere in “Zeppelin III” and Page doesn’t get enough time to do his thing outside of “Heartbreaker.”

But this is still my fifth-favorite album of all time. They were still trying to discover how good they could be and so pushed the limits as hard as possible. There’s nothing quite rational about why this is my favorite LP of theirs but that’s how I know it’s true — I can’t say what exactly they did with this album that makes it resonate so heavily with me. Every song kicks it.

“Moby Dick” on their live album “How the West Was Won” is 20-ish minutes long (used to be longer before the re-remaster which also saw to it that four songs got cut). You know why. Bonham mashed.