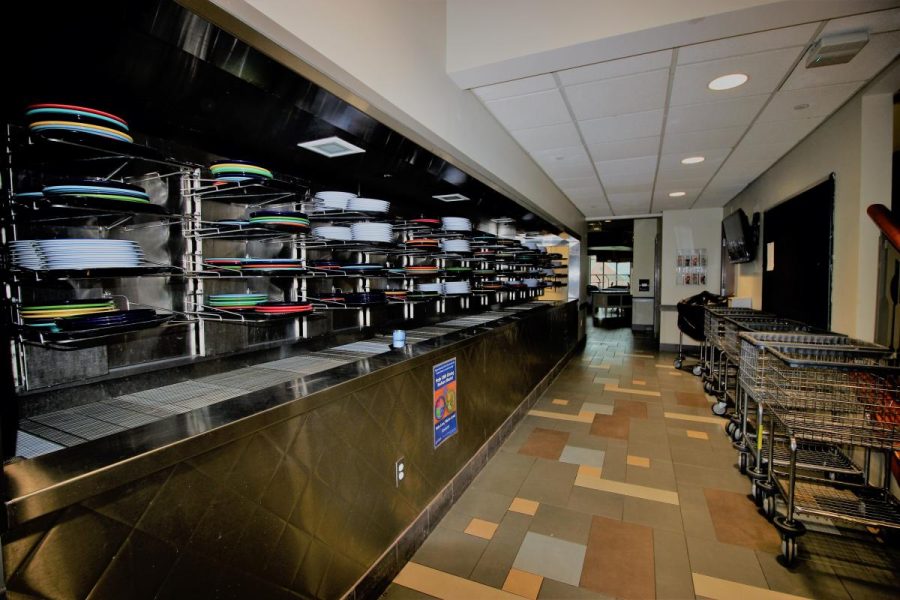 As part of the ongoing sustainability efforts at the University of New Hampshire (UNH), this semester’s first rounds of food waste collection in the Durham dining halls was conducted in the past weeks.

UNH dietetic interns partnered with Hospitality Services to track the amount of food that is wasted each day. Every semester, the interns stand by the dish return with a big yellow trash bin and scrape off the left-over food off the patron’s plates in each dining hall for breakfast, lunch and dinner. At the end of each meal, they weigh the bins of food and track how many pounds were collected for each meal at the dining halls.

“In the dining halls we do plate waste and the dietetic interns, that’s their big project for the semester, so there’s two different weeks; week one is an initial collection and they do an intervention in the middle, and then they do a follow-up collection, hopefully seeing a difference. And this semester too they did an initial pre-collection survey to get an idea of like, people’s beliefs about food waste and if they’ve thought about it or not,” UNH dietitian Rochelle L’Italien said.

Once the waste is weighed and recorded, it then goes to Kingman Farm on campus to be composted. UNH’s composting program was established in the early 2000’s and is run by the College of Life Sciences and Agriculture, the Sustainability Academy, NH Agriculture Experiment Station and UNH Dining as a part of UNH’s Food and Society Initiative and Local Harvest Initiative. According to their website, Sustainable UNH, approximately 25,000 – 40,000 pounds of food waste are collected and composted per month during the academic year. That adds up to approximately 200,000 pounds per year. UNH dining staff began collecting food waste and bringing it to Kingman Farm in the summer of 2006 and has been since.

Project Director of the Sustainability Institute at UNH Jennifer Andrews helps run the composting program and is an advocate for healthy living. The food waste accumulated at the dining halls is not only an environmental issue, but it also costs the university money.

“The fact that we are purchasing food that does not get eaten means wasted money, unnecessary fossil fuel use and increased climate change, unnecessary water use and land disturbance. And it’s especially sad because we know that we have students and families in our community who are food-insecure; to see food being produced, transported, prepared, taken by dining hall patrons and then not actually eaten seems especially unfortunate from that perspective,” Andrews said.

To gauge the average amount of food waste in the three dining halls, the UNH dietetic interns take the extra food on people’s plates when they go to the dish return and weigh the bins at the end of each shift. The dietetic interns began their plate waste intake a couple weeks ago, will do their intervention, and then do another collection to see if there was a decrease in the waste.  The first collection showed that 207 pounds of food was thrown away in Holloway Commons (HoCo), 193 pounds in Philbrook (Philly), and 187.4 pounds in Stillings. The number of patrons that eat in the dining halls vary day to day, semester to semester, year to year, so what the interns collect is essentially a snap-shot of the food wasted. To more accurately estimate the food waste, they calculate the ounces per person based on the pounds they collected.

“It’s important to look at it [as] ounce-per-patron because obviously like I said, because the more people you have, the more waste you are going to have. The collection is in two-hour windows so if they had done it all day, it would be more. So, it’s more of a snapshot,” L’Italien said.

One dietetic intern Kyla Krumbolz said that the amount of food wasted in each dining hall changes based on what is being offered and if the students like it or not. Amber Doucet, another intern, agreed that the food served impacts the reasoning behind the increase or decrease of the food waste.

“Like she said I think it depends on the acceptance of the food too so these special nights that we do like New Orleans Night, if people are really enjoying the food, chances are they are going to waste less. But I think too sometimes the serving spoons can make a huge difference on how much food people take because, you know rice and it’s kind of sticky and they use a big spoon they are going to get a lot more on their plate than they intended to so they may not eat it all and then it all goes to waste,” Doucet said.

Part of the interventions they do between the collection weeks involves teaching patrons about portion sizes and trying to take just one scoop of what you want and going back up for more if you are still hungry.

The results of the second week of the plate waste collection has not been calculated yet at time of publication.