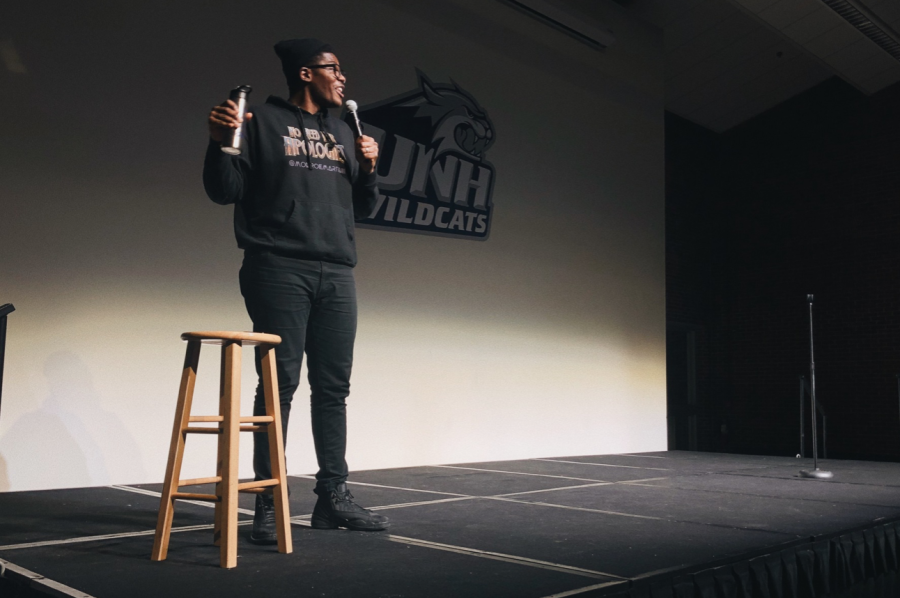 For students in the Strafford Room on Monday, Jan. 21 at 9 p.m., their semester got off to an upbeat and comedic start thanks to Opening Night Comedian Monroe Martin III and openers Improv Anonymous.
Martin, throughout his presentation, provoked laughter and shock from the audience from a variety of topics, ranging from dating and marriage to the struggles of daily life. Inevitably – given the region and time of year — Durham’s winter weather crossed his mind, causing him to question the students’ motivations for coming back after winter break.
“I don’t know why you’re all still at college, it is one degree outside! That is enough to make me drop out,” Martin said. “‘Why didn’t you graduate?’ ‘It was one degree outside! I can’t learn under those conditions!’ It’s too f***ing cold, you know, this is like…I don’t know, I’m really contemplating going back to Africa.”
The snow and ice did not linger on his mind for long, however, as he quickly changed gears and described his warm and happy marriage, stressing how proud he was of his accomplishments so far.
“I like really being married and I’m proud of myself for getting married because I live in New York, and this is the first time I’ve ever lived with a woman and it wasn’t for survival, so I’m very proud of myself,” Martin told the crowd.
However, the comedian stressed that his romantic endeavors have not always been as lovely as he would have preferred; one such incident involved competing with another man whose stylized hair stirred jealousy in Martin.
“This is funny, but it may seem unfair, but we stood there and made her choose. This s*** was like ‘Goosebumps,’ it was like, ‘choose your destiny,’” he recalled. “Do you want the n**** with the good hair and the bad skin, or you want the dude with the bad hair and the bad skin…but a really big personality? She picked me!”
His feelings of victory were short-lived, however, when he found out that the woman in question was forced by her cousin to talk to him regardless because she had allegedly been ruining their night at a comedy club.
“She didn’t want to be there and [her friends] were like, ‘hey, you need to drink all this beer or we’re going to make you talk to that big black dude.’ And she drank all the beer and she still had to talk to me!”
His woes were not just romantic; for a while, another source of irritation stemmed from – of all things – cats.
“I used to judge, like, people who would put their animals in, like, sweaters and s***, right? And they’re like, ‘this is my baby,’ and I’m like, ‘it’s a f***ing cat! What are you doing?!? It hates you right now, it wants to just scratch your face off.’”
Ironically, however, he soon found himself part of the craze, as he does everything he can to care for his cat – including giving them outfits – saying that he has “never loved anything this hard.”
Martin still expressed confusion, though, when, in the middle of asking an audience member about their cat, they revealed to be the owner of a hedgehog.
“A cat and a hedgehog are two different things,” he responded. “You have a hedgehog? That’s like above cat… there’s crazy cat-lady and then there’s, ‘hey, she’s got a hedgehog, yo!’”
Martin, who has appeared on “The Tonight Show,” “Last Comic Standing,” “Joking Off” and “Master of None,” among many other shows and venues, told The New Hampshire that his love of comedy and being a comedian stems from the art form’s surprising nature and the notion that the audience “cannot predict the outcome.” But only, per Martin, if those on the stage give it their all.
“You can go up there, you can tell yourself you’re going to kill it; but you don’t know how they’re going to receive the material, and I like that unsureness because… you have to try every single time you go on there,” he said. “And if you don’t try, then you shouldn’t be up there.”