Not Too Sharp Presents: A December to Remember 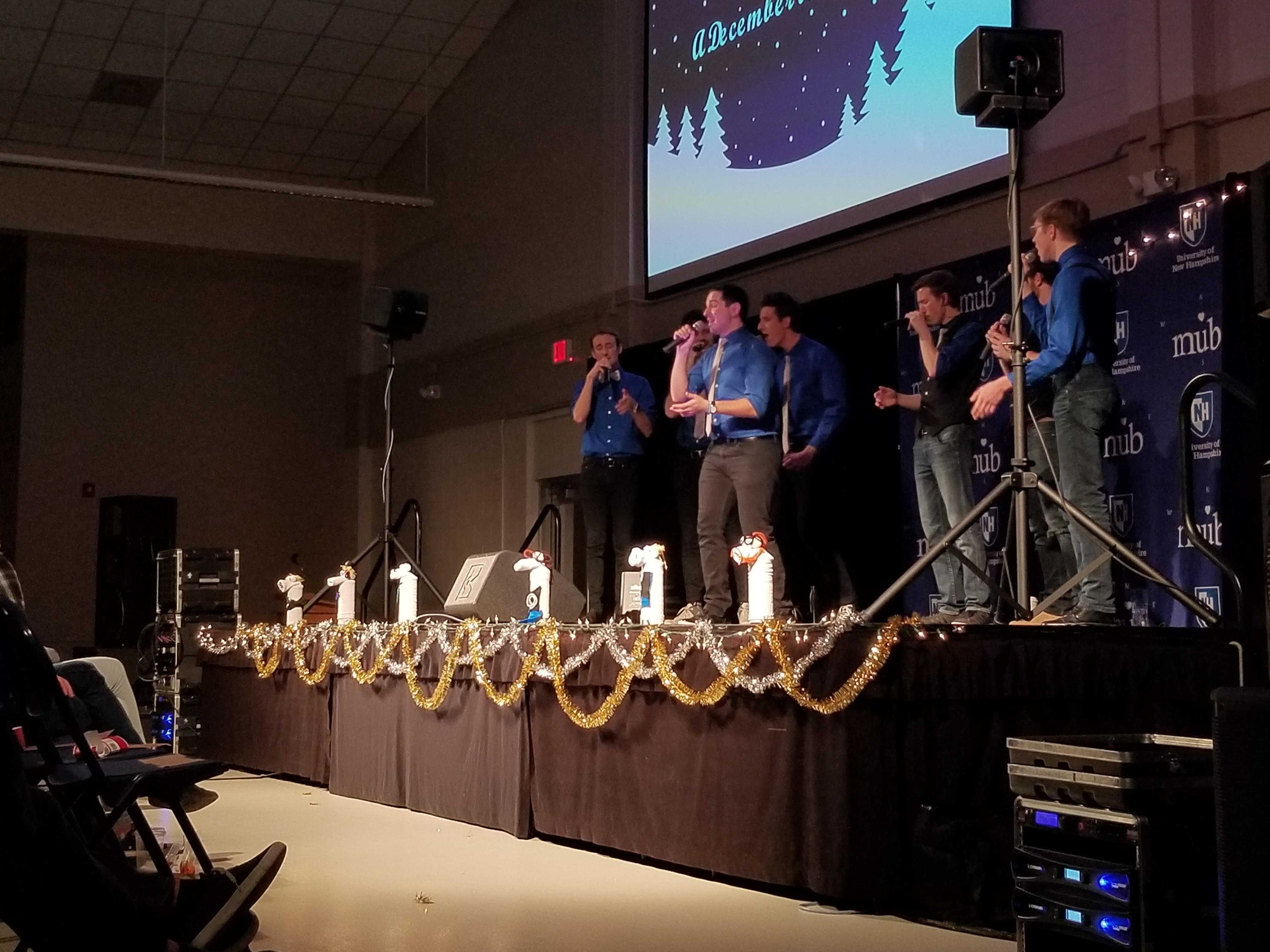 Last Saturday night, University of New Hampshire (UNH) a cappella group Not Too Sharp (NTS) put on their winter show, “A December to Remember.” The hour-and-a-half show started at 7:30, with audience members filling nearly every seat in the Memorial Union Building’s Granite State Room.
As the lights dimmed and the looped slideshow introducing Not Too Sharp’s members faded to black, the concert’s opening group stepped on stage. Before NTS had their turn,
Maiden Harmony, an all-female a cappella group on campus, performed the Kings of Leon’s classic alternative rock hit “Use Somebody,” Wham’s! melancholy “Last Christmas” and Dua Lipa’s “Be the One,” which was emotionally belted out by
the group.
After impressing the crowd, Maiden Harmony took a collective bow and noted that next time, NTS would be opening for them. Maiden Harmony then cleared the stage for the next act: NTS’s video skit, titled “Secrets 2: Sockappella.” The skit was a reference to a similar video from 2014.
“Our a cappella group did an intro video called ‘Secrets’”, Matt Derrick, a junior NTS member, said of the skit. “It was basically a parody of everyone in the group getting together and sharing their deepest darkest secrets. And then we just played it at
the show and the crowd loved it.
Putting a twist on their classic video, NTS created this sequel using sock puppets and was equally well-received by audiences.
Following the brief comedy sketch, NTS finally hopped on stage, accompanied by thunderous applause, and dove straight into Brett Eldredge’s “Don’t Ya.” This a cappella rendition of conventional country music put a unique twist on the song by utilizing a hip-hop style of beatboxing. The holiday classic “Deck the Halls,” a performance full of energy, soon followed. Before a brief inter mission, NTS left the audience with heartfelt versions of Ed Sheeran’s “Perfect” and Sam Smith’s “Have Yourself a Merry Little Christmas.”
After the intermission, having swapped their signature blue button downs and silver ties for more causal NTS t-shirts, the group rekindled the crowd’s energy with Hootie and
the Blowfish’s “Hold My Hand.” Between the smiles on stage and the audience clapping on tempo, a case could be made that this was the fan favorite. Pulling caroling songbooks into view, the group provided an authentic winter experience with the mellow and pleasant “O Holy Night.”
However, NTS quickly changed pace afterward, with one member describing themselves as a “closet country fan” before singing Josh Turner’s “Your Man,” accompanied by western dance moves.
Following this was Lauv’s emotional “The Story Never Ends,” along with NTS’ alumni song, James Taylor’s “Lonesome Road.” As over a dozen NTS alumni joined them onstage, the group explained that back when they were founded in 2002, their business manager had cancer and survived. She asked NTS to sing “Lonesome Road” for her. In honor of
her battle, “Lonesome Road” became the NTS alumni song.
Greg Hatfield, a 2016 NTS alumnus, said that coming back to NTS is fun but also jarring. “It’s a total time warp. I look around at some of the older members and I’m like ‘Wow, I remember auditioning some of these guys.”
After the alumni song, NTS wrapped up with a cover of the indie rock band Bastille’s “Icarus.” Withthe groups signature beatboxer shining brightly once again, NTS had a
touching final song. However, the crowd could not get enough of Not Too Sharp as they secured an encore with a classic chant of, “One more song!” Caving, NTS ran a lap around the audience before climbing back on stage for They Might Be Giants’ humorous song “Doctor Worm.”
After the show, NTS member Matt Derrick explained that everything from set up and scheduling to social media presence is up to the group. Derrick described the struggles
an a cappella group might face when choosing songs. “Not only do we have to find songs that sound good as a capella, but we have to find songs that sound good with our voices.” Hatfield agreed with Derrick and elaborated on the extra difficulties this year’s group is facing: “I’m really impressed. Usually they have 12 members. That way two people cover each part and if someone makes a mistake it’s hidden. But now, with only seven guys, the margin for error is much smaller than before.” As far as the audience reaction went, NTS hit the nail on the head Saturday night.
The livestream of Not Too Sharp’s Dec.1 performance is available on Not Too
Sharp’s Facebook page. Not Too Sharp’s next performance will be at the Step for
St. Jude fundraiser on Dec. 7. Held at UNH’s Paul Creative Arts Center, the show
will be $5 for students and $8 for non-students.