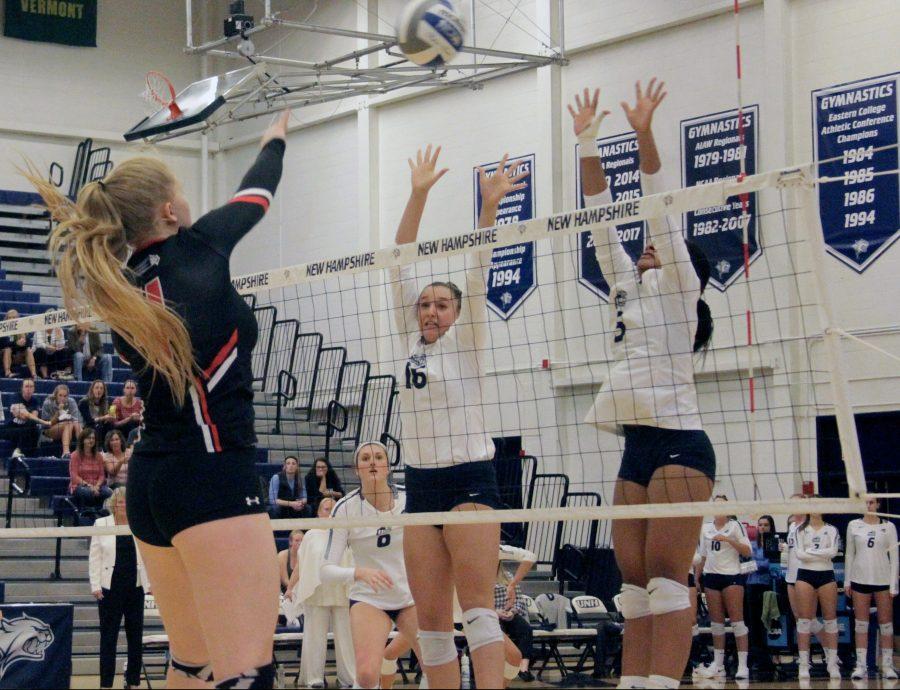 Last week the three-seed UNH volleyball team (12-15, 8-4) was in Stony Brook, New York for a first round America East Playoff match with the two-seed Albany Great Danes (16-11, 9-3).
The Wildcats were defeated 3-0 by the Great Danes, eliminating them from the America East Playoffs.
With the win, Albany faced defending champion one-seed Stony Brook (21-8, 12-0) in the America East Championship. Stony Brook defeated four-seed Hartford (3-9, 6-20) 3-0 Friday.
Stony Brook became back-to-back America East Champions on Saturday with their 3-2 win over Albany. The Seawolves lost the first set 25-17 then won the next two sets in dominant fashion. The second set went to Stony Brook 25-14 and they won the third 25-18. Albany held the lead for a majority of the fourth set and held it despite a comeback effort from Stony Brook, winning the set 25-21.
That meant America East Championship would be decided in the fifth set. Stony Brook started the set strong and won the final set 15-8, securing their third America East Championship.
As for the Wildcats, their playoff bout did not go as expected. In the match against Albany, Senior middle blocker Gabri Olhava and junior outside hitter Kennedi Smith led the Wildcats with 11 kills each.
Smith had 10 digs, finishing her season with a team-high 14 double-double’s for the year.
Sophomore setter Emma Patlovich led the Wildcats with 23 assists, and junior libero Emily Tanski recorded a team-leading 13 digs.
Albany’s leading attackers had 14 kills apiece, as junior outside hitters Akuabata Okenwa and Chloe Evering led the way for the Great Danes.
The Wildcats started off the first set well, jumping out to an early 6-1 lead off a five-point run. The Wildcats held a six-point lead until Albany tied the set at 14. Olhava got a kill to retake the lead, then the Great Danes won consecutive points to take their first lead. Junior right-side hitter Hannah Petke and Olhava got a block to tie the game at 16, then Albany went on a four-point run to give them a 20-16 lead which they would not lose. Albany won the set on a service ace, 25-23.
In the second set, Albany began with a 5-2 lead that grew to 12-7. UNH called timeout, and out of the timeout scored five consecutive points led by Olhava, tying the score at 12. This prompted an Albany timeout, which worked to similar effect of the UNH timeout.
Albany won seven of the next nine points to give them a 19-14 lead over the ‘Cats. UNH called their final timeout which was followed by three kills from first-year middle blocker Maddi Wiedenfeld. Leading 20-19, Albany scored three straight points and eventually closed out the set 25-22.
Looking potential defeat in the eye, the Wildcats geared up for the potential of three more sets. Unfortunately, the game did not go the Wildcats way. UNH won the first two points with a kill from senior middle blocker Alexa Markman and an Albany attack error. After a timeout, Albany came back firing to earn a 6-2 lead. Trailing 11-6, the Wildcats called a timeout. First-year outside hitter Emma Tupa got three kills that initiated a 7-2 run for UNH. Eventually the score was tied at 15, then the Great Danes scored four points in a row to take the lead 19-15. Their season beginning to fade away, the Wildcats made one last push led by a Tupa kill to bring the match within three points.
Come match point, the Wildcats were down 24-20. Markman got a kill for one last glimmer of hope that was shattered by Albany’s Okenwa with a thunderous kill. Albany won the set 25-20 and completed a first-round playoff sweep over UNH.
This loss marked the end of the five seniors’ Wildcat careers. Olhava, Markman, senior setter Mali Jereczek, and senior outside hitters Molly Wotton and Sarah Shelton all finished their tenures as members of the UNH volleyball team.
Tanski finished her remarkable season with 566 digs, breaking the UNH single-season record which was previously held by Madison Lightfoot and Jessie Schnepp.
Olhava ends her career with 860 kills and 274 blocks.