The Bane of Beowulf: The Indigenous Touch of Action Bronson 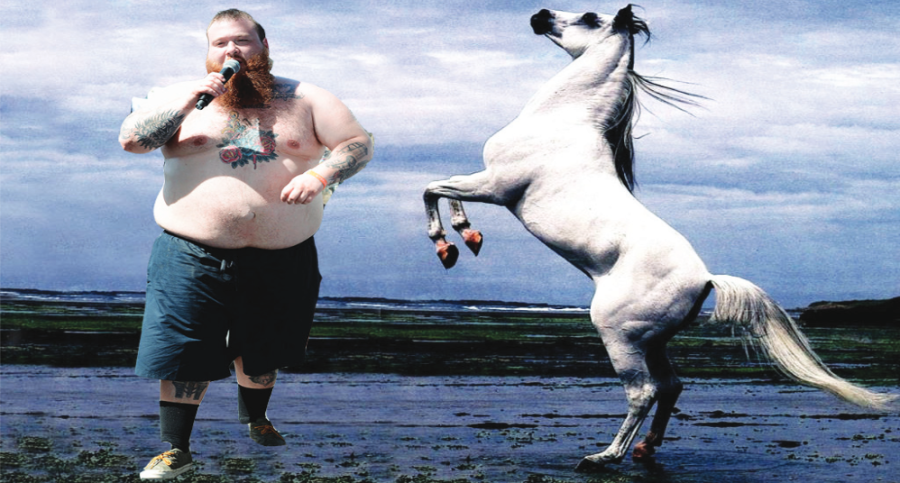 There once was an age when heroes reigned supreme: men rode upon stallions to complete quests and procure fame through wild acts of bravery while poets detailed these heros’ feats in verse that’s hilariously descriptive when translated to modern-day English. In this time, there existed a handful of men who were greater than the rest. They were akin to gods gliding along the Earth’s surface.
Today, we’re far more realistic. We’ve slowly strayed from telling ridiculous tales like those of the men’s men who dominated the 10th-15th century. Life has moved past physical triumphs and exaggerated storytelling, for better or for worse.
Yet, as I’ve learned more and more about something I thought I’d hate in my “ENGL 512: The Age of Heroes from Beowulf to Shakespeare” pre-1800’s literature requirement course, I’ve realized that we do have one person, no, one savior, in our modern-day folklore who comes close to the alpha standards set by Beowulf and the Green Knight.
That man is Action Bronson.
Action Bronson is a 34-year-old rapper hailing from Queens, New York who has a vocabulary and a thought process like no other. In every interview and every song he’s ever had a hand in, he dazzles audiences with gut-busting boasts and a way with words that flexes vivid imagery and endless laughs.
The man is a walking quote, so instead of trying to recite his best verses or trying to write a profile-type article on him, I decided to do the only thing I could in way of capturing the mythical essence of Action Bronson: write a Middle-English-style epic poem about him. He’s been both the hero we’ve wanted and deserved, and he’s done it all at over 300 pounds, so it’s about time somebody scribes the journeys of our generation’s Nostradamus.
So here it is: “The Bane of Beowulf: The Indigenous Touch of Action Bronson.”

One mystical morning in the mythos of man,
God reached down and tore a hole in the human habitat,
The hierarchy as we heard hyperextending in our hands,
As the Man Upstairs mangled a meteorite-measured hole
In our – unbeknownst to most – solvent ceiling
And dropped down a descendant of Androids and Aliens,
A creature none had ever called upon before.

Draped in Carhartt cuts and corner-store excellence
He fell fantastically to the human floor
Floating and gloating and glowing
He jumped from a high place and
Landed – perfectly.
And as the Armenian Allah did so, Stunning the swooning crowds,
He spoke a single sentence:
“It’s me.”

The titular tentena topped his tundra’s tip,
The Armenian doily dolloped his decadent diagram.
There he stood,
Adorned in an awe-inspiring Carhartt cape,
The tan-cargo cloth free-flowing in his flamboyancy.
And, of course, his crown:
A glimmering and glinting green-gold New York Jets hat
That topped his fire-red, ridiculously radiant hair
Which connected to his lifeline of luxury:
The blazing beard which bore him blissful benefits,
Perfectly-trimmed and triumphant.

With an anthropological and Armenian knowledge
Unbeknownst to most,
Weighing in at a graceful 315 pounds of athletic excellence,
This wild wildebeest known as “Action Bronson”
Excelled forward in full-speed fury,
Eating up the ground like tacos in the Galapagos.

His through-and-through New-York frame
Gave way to a strapping steed.

But this wasn’t just any horse.

This was an albino colt,
At least four times the size of any other horse
On our humble planet Earth.
This white bronco tore away from the pack
And chewed on the hearts of its enemies with a sneer
And chuckled in the childish face of Death
And rippled with muscles, like an ocean of bodybuilders
And defecated quartz-laced, chakra-centering tchotchkes
And stole the hearts of beautiful women as a hobby
And enjoyed fine authentic Colombian food in the park
And neighed in a measured, sinister uproar
And re-emerged re-energized as the Alpha
And softly spoke a soliloquy:

“I squat thousands of pounds.
Leg press like you can’t believe.
One would compare me to,
if you were going to compare me to anybody in life,
Mariusz Pudzianowski.
I f****** run wild, free,
You can see my muscular striations when I stride.
Who knew I could sculpt?
Who knew I could paint?
It’s been embedded;
It’s who I’ve been my entire life.
I do throw pottery,
There’s no doubt about that.
I have several different times
In several different positions:
Upside down,
Hanging from things.
I’m really good at sculpting.
I have an indigenous touch.
It’s not a refined touch;
It’s not going to be perfect.
It’s going to be an indigenous take.
It comes from 10 to 15
Past lives that I’ve had.

In a dream,
I just saw these horses, running.
I just see horses, running,
Stallions, and there’s all kinds of different crazy ones.
But then there’s me;
The singular white one.
The albino horse.
He has weird traits,
But he was a f****** animal.
There was no taming him.
It looked like he was on steroids.
Crazy juice.
Me by myself
Is like the four horsemen.”

The brilliant mare clawed the dirt
Of Flushing, Queens, that lay beneath
His feet,
And roared on against the road,
Against the Earth
That he was too good for.