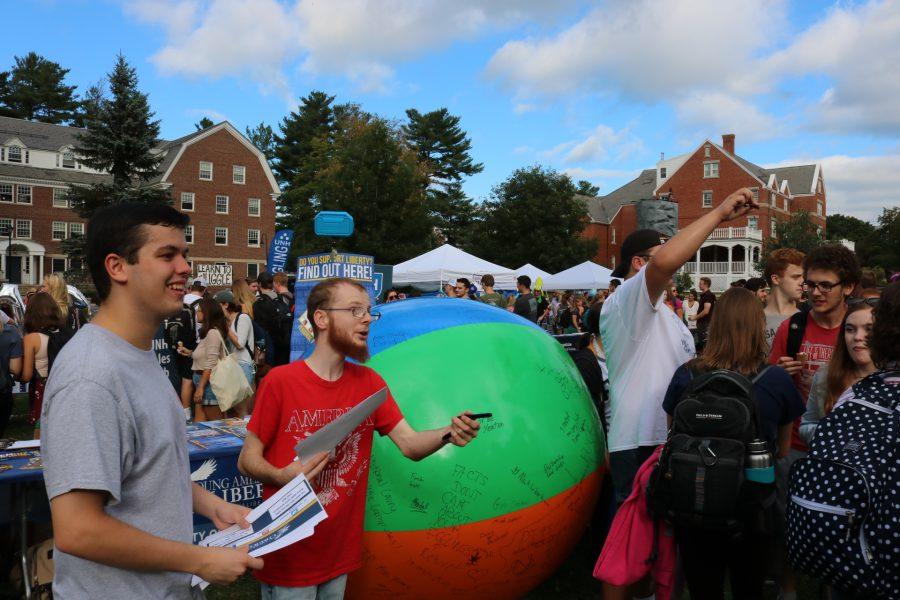 The Young Americans for Liberty encourage students to write on the "free speech ball" at U-Day in September. Photo courtesy of Ian Lander.

By Jordyn Haime
As political opinions in the United States become more and more polarized on the left and the right, one group at the University of New Hampshire (UNH) has felt under-represented due to their centrist political points of view: libertarians.
“When you look at any university, you’ll always see a College Democrats and a College Republicans. Or you’ll see a Turning Point and a College Democrats. And I’ve never seen a libertarian organization represent those that have that different viewpoint,” says Brandon Bakken, a junior biomedical science and medical veterinary science major, and the president of Young Americans for Liberty, the only libertarian student organization at UNH.
“Because if I was to go to a College Republicans meeting or a Turning Point meeting, I’d almost disagree 100 percent with what they’re saying, and the same thing would happen if I went to a College Democrats meeting,” Bakken said.
Young Americans for Liberty became a recognized student organization at the end of last semester. It’s only one chapter of the national organization that’s expanding its representation at universities and colleges across the United States.
According to Young Americans for Liberty’s website, it is “the largest, most active, and fastest-growing pro-liberty organization on America’s college campuses,” and there are currently more than 760 active chapters across the country.
Bakken says UNH’s Young Americans for Liberty hopes to educate students about their individual liberties and constitutional rights, and to encourage civil discussion that may bridge the widening gap between political sides without endorsing any political candidate.
“What we want, is we want people to join our group that do have differing opinions so that we can have a conversation and find a common ground and find that answer. You know, we’re all about having a good conversation. We’re not about yelling at one another,” Bakken said.
Dane Hoover, a junior information technology major and vice president of Young Americans for Liberty, describes the organization as “the happy medium that brings everybody together. We agree some with the right, some with the left, and we just want to bring both sides together to agree on a common ground,” he said.
“A really good way to think of our group is, take your first right on economics, and take your first left on social issues,” Bakken added.
At their weekly meetings, the group usually discusses a passage from a book or has a conversation around a prompt or idea, and tries to figure out the best ways to execute discussions about difficult topics.
They also engage in political activism events like the “free speech ball”: A giant beach ball where students are invited to practice their right to free speech by writing whatever they want on the ball in marker. It’s an event Young Americans for Liberty has done last semester as well as at U-Day this year, and not all students have been welcoming to it.
When setting up for the event last year, one student passerby brought up the possibility of hate speech being written on the ball.
“I was like, well, technically it is free speech. It’s not right, but if you wanna say it I can’t stop you. And then they were like, ‘alright, I’m fine, thank you,’” Bakken said about the incident. “I know that during U-Day we did have some other snappy comments along those lines for our free speech ball.”
It’s not the first time UNH students have clashed over free speech. Last year, the conservative group Turning Point USA hosted political commentator Dave Rubin for a discussion panel on cultural appropriation, social justice and free speech. Protesters formed a blockade in front of the Whittemore Center, where the event was held, and regularly interrupted the speaker throughout the event, shouting things like “hate speech does incite violence.”
Though UNH is a mostly liberal campus, Bakken and Hoover say they haven’t received backlash for being outspoken about their views.
“Most people are welcoming and they have too much going on in their lives to really…shut us down or think that we are evil for having our political opinions. There’s not really a lot of backlash other than a couple comments at the free speech ball,” Hoover said.
“It seems that, just because we’re libertarian, when we tell people, some that are more radical in their beliefs than others will see that as, ‘oh, you’re not a republican, I can respect you.’ Which is sad how some people view that…but for the most part we don’t really get much backlash about being libertarian,” Bakken said.
Young Americans for Liberty meets at 6 p.m. every Thursday, but does not yet have a permanent meeting space. Interested students can sign up through Wildcatlink to get updates about their upcoming meetings and events.