UMass proves themselves in win against UNH 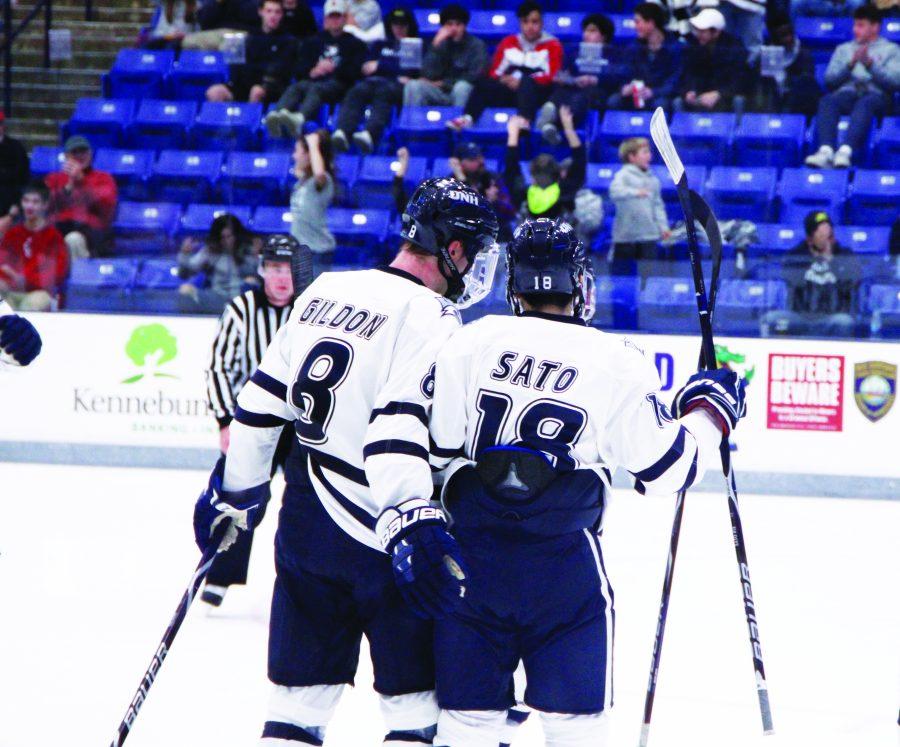 In Saturday’s match against UMass Amherst, the University of New Hampshire Men’s Hockey team got off to a lethargic start. Poised against a strong UMass team that currently sits at 5-1-0 overall and 2-0-0 within the Hockey East, the Wildcats knew going into the match that they would need to bring it.
To the Wildcat’s dismay, that was not the case early on. The beginning of the period was a back and forth battle, then UMass began to dominate the possession battle. UNH suffered their first goal against with 12 minutes and 41 seconds remaining in the period. UMass sophomore right wing Mitchell Chaffee converted on a one-timer off of a beautiful behind the back assist from sophomore left wing Oliver Chau. This was Chaffee’s sixth goal on the young season. Chaffee currently leads the Minutemen in goals and is second on the team in points (9). He is also tied for fourth in the conference for points per game (1.29).
This was not the only goal UNH sophomore goalie Mike Robinson gave up in the first.
The Minutemen scored again with six minutes remaining in the first period, as sophomore center Philip Lagunov was positioned directly in front of the net and was able to poke the puck past Robinson’s outstretched stick. Lagunov was assisted by senior left-wing Jacob Pritchard and sophomore right wing John Leonard. This was Lagunov’s third goal this season, Pritchards fifth assist and Leonard’s seventh assist.
UMass outshot the Wildcats 12-6 in the first period.
Head Coach Mike Souza acknowledged the Wildcat’s issues from the game.
“I thought we mismanaged the puck again, felt we were undisciplined at times with our structure. They’re going to beat you. You do not need to give them chances, they are still a strong team and they are going to beat you”
Late in the first, junior defenseman Anthony Wise recorded a two-minte minor for hitting from behind. Soon after, UMass first year defenseman recorded a two-minute minor for checking to turn the match into a four-on-four. UMass’ aggressive play continued as a minute later, sophomore center Jake Gaudet recorded a two-minute minor for tripping.
UNH could not convert on the five-on-three or the ensuing power play.
In the first half of the second period, UNH was more aggressive on offense, and the Wildcats were able to generate six shots on goal in the first nine minutes of the period.
Despite winning the shots battle in the period, UNH was unable to turn any of those opportunities into points.
At the 13-minute mark, UMass sophomore defenseman Cale Makar converted on a shot to the top left corner of the net. Makar scored his fourth goal off of assists by Chaffee and Gaudet.
UNH did a better job of holding onto the puck this period, but every time they brought the puck in front of the UMass net, the UMass defensemen clogged the lane with bodies and sticks.
Midway through the second period, UNH senior defenseman Richard Boyd recorded a two-minute minor for slashing. UMass did not convert on the power play.
Later on, UNH’s sophomore defenseman committed an interference penalty the resulted in a two-minute minor. On the same play, UMass sophomore left-wing Marco Bozzo was penalized for embellishment on the play. This set the match to four-on-four, yet neither team was able to score in the remainder of the period.
New Hampshire’s defense began the fourth period with strong play, highlighted by two glove-saves from Robinson who refined his performance after a shaky start.
UNH head coach Mike Souza commented on his decision to keep Robinson in for the entire game.
“I do not think [Robinson] had anything to do with [the deficit]. He was solid in there, gave up a couple goals through bodies… it’s the group in front of him, and we have to do a better job of helping him out,” Souza said.
Eleven minutes into the period, the Minutemen extended their lead to 4-0 on a goal from Leonard. Makar and sophomore defenseman Marc Del Gaizo assisted on the score.
UNH continued to miss badly on their goal scoring opportunities, rocketing multiple shots over the net and the glass.
The horn finally sounded for the Wildcats with a minute left in the game, as sophomore right wing Kohei Sato recorded his first goal of the season on a wrist shot from the right side of the net. This ended the shutout for UMass sophomore goalie Matt Murray.
The celebration was short lived as the Minutemen scored their fifth goal of the game with a shot from senior left-wing Jacob Pritchard. That was his fourth goal of the season.
The UMass Minutemen defeated the Wildcats 5-1, improving their record to 6-1-0 on the season, and 3-0-0 in the Hockey East Conference.