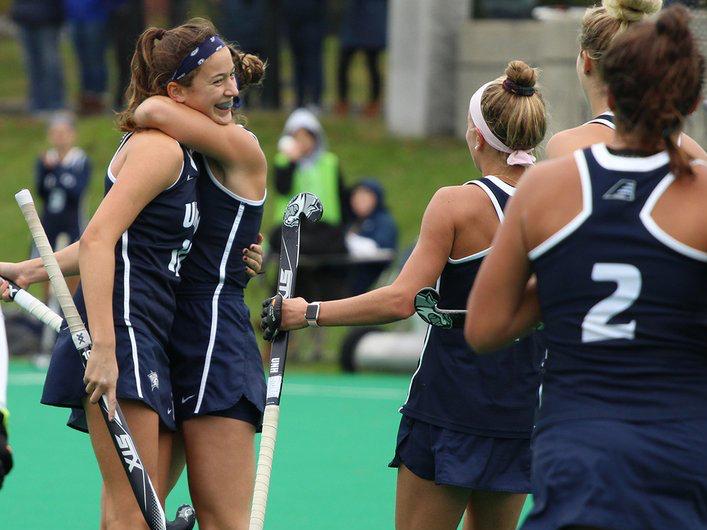 The ‘Cats three-game winning streak came to an end Nov. 1, losing 4-3 to #22 Stanford University.
UNH snuck into the playoffs after finishing the regular season strong, but were unable to defeat the #1 seed in the America East West Division.
Stanford took the lead just two minutes and 30 seconds into the match, when sophomore attacker Corinne Zanolli scored her first of two goals of the game.
Zanolli took a pass from junior attacker Jessica Welch off a corner, and Zanolli fired a shot that made it past UNH senior goalie Kelsey Rudert.
A UNH mistake led to the second Cardinal goal of the first half. Senior forward Emma Christus took the ball from a UNH player and shot from the top-right side. The ball found the back of the cage to put Stanford up 2-0.
Rudert was able to keep the game close, when Stanford had another corner opportunity in the 30th minute. Rudert made a save to keep the score at 2-0 going into halftime.
UNH began the game looking like the team that struggled most of the season, but came out in the second half looking like the team they have been lately, highly competitive.
The Wildcats wasted no time getting on the scoreboard in the second half. First-year forward Finn Caron redirected a shot from sophomore midfielder Isabelle Danahy just 20 seconds into the second half to make it a one-score game.
UNH took the momentum from the hot start to the second half and converted it into another goal just five minutes later.
This time, sophomore forward Bloem van den Brekel scored off a corner to tie it up 2-2 in the 40th minute. Senior midfielders Katie Audino and Rachel Bossi were credited with an assist on the score.
Stanford regained the lead in the 48th minute when Zanolli found the back of the cage for the second time off a corner.
The back and forth action continued, when Finn registered her second goal of the game in the 51st minute, tying it up once again at 3-3. Caron had an open goal after Brekel fired a shot that forced Stanford’s goalie to come off the goal line. Caron corralled the ball and pushed it 10 feet into the open cage.
The game-winner came from the stick of Stanford’s first-year defender Molly Redgrove in the 62nd minute. Redgrove scored from the top of the circle off an assist from both Welch and first-year midfielder Fenella Scutt.
UNH was unable to score in the final eight minutes. The Wildcats finished the season with an overall record of 6-12.
Four Wildcats were honored for their play and their work in the classroom throughout the season.
Bloem van den Brekel and Rachel Bossi were named to the All-Conference East Division for their stellar play in the regular season. Finn Caron, who led the team in points, was selected to the All-Rookie America East Team. Junior midfielder Kayla Sliz was voted to the America East All-Academic Team.
The Wildcats will return a lot of players for next year’s team, but five seniors have played their final game for UNH. The Wildcats will have to replace Audino, Bossi, Rudert, Erin McNamara and Rachel Thomson as their UNH athletic careers come to a close.