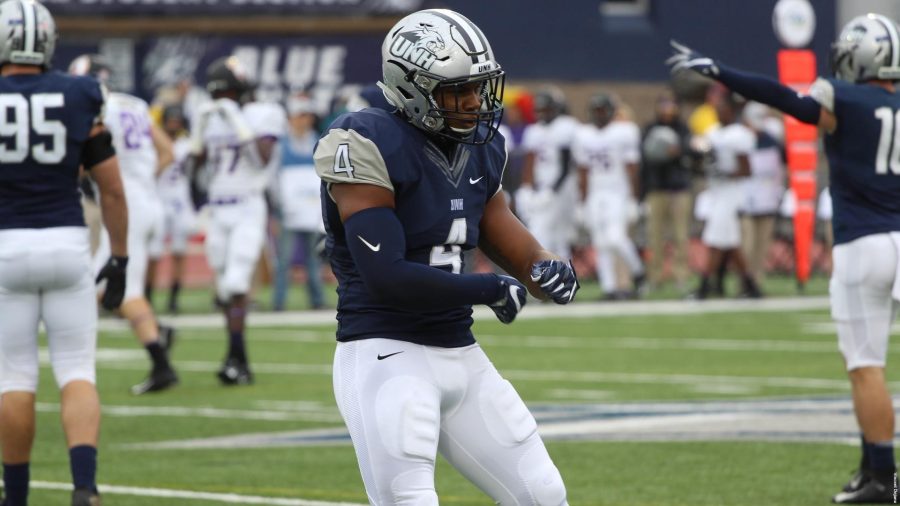 As the football season comes to a close, UNH finally gave wildcat fans something to get excited about during a season that was filled with a lot of disappointment. This past Saturday the wildcats hosted the third ranked team in the country, James Madison University.
It was a rainy, cold, New England fall day and the wildcats maximized the home field advantage to the fullest. UNH defeated JMU 35-24 in a game where their defense made big plays all day long, and their offense continued to look like the offense that fans were expecting to see prior to the start of the season.
Last week, the defense was able to hold Villanova to zero points. This weekend they continued to make stops. The defense played well enough to slow down the high powered JMU offense.
On the first drive of the day, UNH junior linebacker Quinlen Dean was able to apply pressure and sacked JMU quarterback Ben DiNucci. Dean was able to force a fumble on the play and first-year defensive tackle Niko Kvietkus jumped on the loose ball.
Following the fumble recovery, senior quarterback Trevor Knight threw a beautiful 29-yard touchdown pass that fell perfectly into the hands of senior wide receiver Kieran Presley.
On the next JMU position, the Wildcats defense came up big again. Junior safety Rick Ellison made a great read on the ball and intercepted DiNucci, running the ball back for a 44-yard pick six.
It was just over five minutes into the game and the Wildcats were already up 14-0.
And the turnovers didn’t stop there. UNH would go on to record six turnovers on the day, including another pick six in the second quarter when junior safety Evan Horn scored on a 75-yard return.
In total, the UNH defense recorded five sacks, four interceptions, and two fumble recoveries.
The defense has been playing better and better each week and seems as if it all came together this week. UNH established their dominance early by stopping the run and forcing JMU to turn to the passing game.
By stopping the run, UNH was able to read the quarterback. Being able to heavily focus on the pass led to all the interceptions.
And it wasn’t just one player, the whole defense showed up to play. Eight different players had either an interception, forced fumble, or recovered a fumble. On top of that, four different players had a sack. It was a very impressive performance from the entire unit and the depth of the defensive showed all game long.
After the game, defensive coordinator John Lyons was very pleased. In an interview with UNH insider he shared his thoughts on the defenses performance, “I just thought it was a really good effort by a lot of different guys. They all had different roles. Some were playing on first downs, other ones on third down, and a lot of different shifting parts. It was good. The kids have hung in there and they’ve kept working and I think we’re really playing with a lot more confidence right now.”
The offense also did its part in the win by scoring 21 points of their own. Combined with the two defensive touchdowns, the ‘Cats put a season-high 35 points on the board.
Trevor Knight has missed the majority of the season with a shoulder injury, and Saturday he proved why the Wildcat offense missed him so much. Knight completed 14 of 21 passes for 181 yards, while also throwing for two touchdowns and no interceptions. Knight also led UNH on the ground, running for 89 yards and one touchdown.
In an interview with UNH insider, Trevor Knight talked about how the defensive turnovers inspired the offense, “When the defense is playing that well, when they’re putting up points, it kind of drives you, motivates you as an offense to get going”.
This season has been a frustrating one for the Wildcats; they came into Saturday’s game sitting at 2-6, which is why the victory was so surprising. JMU came into the game with a 6-2 record; they were national champions two season ago, and lost in the finals last year.
UNH knows that over the next few weeks they have the opportunity to spoil some other teams seasons.
After the game Quinlen Dean shared his thoughts on the matchup against JMU.
“It was definitely a great challenge. But personally, I look at them as another team. We don’t care what your rank is,” Said Dean. “You’ve got to step on the field and play with us. Coach Mac talked about that. You’ve got to come out here and you’ve got beat us on our field. You’ve got to play.”
The Wildcats definitely came to play and it showed on the scoreboard, and will be looking to spoil a few more seasons in the upcoming weeks.
The Wildcats will host Albany this weekend at Wildcat Stadium, and will end the year on the road against Rhode Island.